↓
Home→Feasts→So Far Has He Removed Our Transgressions From Us 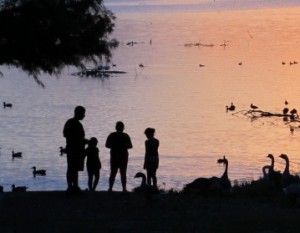 David and his men were returning home, and they saw the city of Ziklag where they lived in the distance.  As they came nearer, they could see smoke still rising from inside the walls.  Amalek had attacked in their absence.  Their homes were destroyed, and their wives and children had been taken captive.  Scripture records that they “wept until the had no more power to weep” (1 Samuel 30:4).  Yet in the midst of their distress, their grief and this seemingly hopeless situation, we read of the most amazing disposition:  “But David strengthened himself in the LORD his God” (1 Samuel 30:6).  In the next few verses, we read how God delivered his enemies into his hands, and “David recovered all that the Amalekites had carried away” (1 Samuel 30:18).

Psalm 103 is simply titled “A Psalm of David,” and we are not told of the occasion for its writing. There is nothing to directly suggest it was the events at Ziklag, for David encountered many harsh disappointments as well as astonishing victories in his life.  Maybe this incident inspired this Psalm, or maybe it was something else.  Whatever it was, Psalm 103 is not just a song of encouragement – it is song of self-encouragement, meant to strengthen not just the congregation but specifically the singer himself.  Bless the LORD, O my soul, and all that is within me, bless His holy name.  The singer then begins to list what he calls the “benefits” lavished upon him by Yahweh.

The first benefit proclaimed is unquestionably the most incredible of all: “Who forgives all your iniquities” (Psalm 103:3). The Theological Wordbook of the Old Testament points out that the verb here translated as forgive, salach (Strong’s Hebrew word #5545), is used in Scripture solely of God.  The wonder of complete forgiveness by the Creator of the Universe, the Holy One of Israel, is the reason the other benefits mentioned are possible.

When he concludes his list, the Psalmist finds himself marveling once again in a merciful, forgiving God.

For as the heavens are high above the earth,
So great is His mercy toward those who fear Him.
As far as the east is from the west,
So far has He removed our transgressions from us.
(Psalm 103:11,12)

Soon we will experience the Holy Convocation known as Yom Teruah, the day of blowing trumpets* (Leviticus 23:24). It is the beginning of the seventh Biblical month, and the beginning of the Jewish civil calendar.  Barney Kasdan in his book “God’s Appointed Times” observes that on this day, which begins the Days of Awe leading up to Yom Kippur, there is an emphasis on repentance.

“In traditional groups, the afternoon … is spent at a body of water (ocean, lake or stream) observing the ancient service, Tashlich.  The word derives from Micah 7:19 where the prophet promises, ‘You will hurl all our iniquities into the depths of the sea.’  To illustrate this beautiful truth, people cast bread crumbs or pebbles into the water and rejoice in God’s promise of forgiveness.”  (Kasdan, p.65)

(Tashlich is the Hebrew word here translated as “hurl” or “cast,” from the root shalak, Strongs Hebrew word #7993)

I’ll have to admit that I had never heard of such a thing until it was announced that the congregation I was attending would have this Tashlich service. The tradition intrigued me, so I began reading about it.  Though not commanded in Scripture as part of the Yom Teruah observance, it is nevertheless a beautiful illustration of our Father’s pardon.  Read again from the Theological Wordbook of the Old Testament on the word Tashlich:  “God’s total forgiveness of sin is graphically portrayed in Micah 7:19, in which God casts the sins of his people into the depths of the sea. The obvious inference is that they are gone forever, never again to be brought to light.”

As I was taking in the reality of all I was reading, I put in a CD from one of my favorite bands, Audio Adrenaline. I had played this disc many times before, but this time I was overwhelmed when I listened to the song “Ocean Floor.”

Strengthen and encourage yourself in Yahweh during this season. When we turn to our Father in true repentance, He forgives all of our sins and hurls them into the depths of the sea, never to be remembered again.

Go and sin no more.

Bless the LORD, O my soul.

* The word “trumpets” is traditional and does not appear in Hebrew in Leviticus 23:24-25.