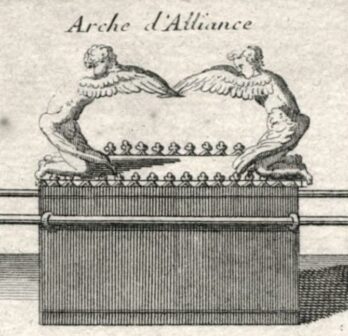 After bringing His people out of Egypt and assembling them at the foot of Mount Sinai, Yahweh, the God of Israel, gave Moses the instructions for building the Tabernacle and its furnishings. We read about them this week in the Torah portion Terumah.

Most holy among them was the Ark of the Covenant, above which was the kapporet (Strong’s Hebrew word #H3727), the covering or “mercy seat,” a term exclusively used for the top of the Ark. On each end of the kapporet were two gold cherubim, about which the Father said, “There I will meet with you; and from above the mercy seat, from between the two cherubim which are upon the ark of the testimony, I will speak to you about all that I will give you in commandment for the sons of Israel” (Exodus 25:22).

Oh, give ear, Shepherd of Israel,
You who lead Joseph like a flock;
You who are enthroned above the cherubim, shine forth!
Before Ephraim and Benjamin and Manasseh, stir up Your power
And come to save us!
O God, restore us
And cause Your face to shine upon us, and we will be saved.
(Psalm 80:1-3)

This is one of a dozen Psalms attributed to Asaph, a musically gifted Levite who served in the Temple, and was composed either by Asaph, his descendants or his students. Although we do not know the time of writing, it may well have been during the time of the Babylonian captivity of Judah. If so, then at this point the kingdom was divided. Andrew Bonar, a well known Scottish preacher in the nineteenth century, observes Psalm 80 as “the joint prayer of all the tribes; the prayer in which the house of Joseph and the house of Judah, so long estranged from one another, unite once more in calling on the God of Abraham, and Isaac, and Jacob” (Albert Barnes’ Notes on the Bible for Psalm 80).

The Psalmist here describes Yahweh as the Shepherd of Israel who dwells between the cherubim, presumably a reference to the covering of the Ark. When this throne was first established, all of the tribes of Israel and many foreigners who had joined them were present at Mt. Sinai. In this Psalm, the author describes the Shepherd as leading Joseph like a flock, a poetic reference to Israel. There is a parallelism in the next line, referring to Ephraim and Manasseh, the sons of Joseph, and to Benjamin, Joseph’s only full brother.

The prayer at the end of the first section is a very simple plea:

O God, restore us
And cause Your face to shine upon us, and we will be saved.
(Psalm 80:3)

This verse repeats three times, but there is a not-so-subtle change each time. In this short Psalm, it seems that an understanding of what our Father is doing and how He is working begins to be revealed. And as the revelation grows, so does both the reverence for and intimacy with the Creator. The author begins by calling on God – Elohim – for restoration. While this is obviously a reference to the Holy One of Israel, it is still a somewhat less personal name or title.

O God of hosts, restore us
And cause Your face to shine upon us, and we will be saved.
(Psalm 80:7)

God has always been and will always be sovereign in every situation. His eternal plan is often misunderstood by us, but never has it failed. At times He has revealed it, and many times man has forgotten it. Now, as we witness first-hand the calling out of both Judah and Joseph and of the beginning of the restoration of the Whole House of Israel, we can look back and see the events of history in a clearer light. The God of Hosts – Elohim Tsavaot – the Almighty leader of the armies of Heaven has brought us to this divinely appointed time in order to accomplish His restoration of both houses of Israel through Messiah Yeshua.

Using the divine personal name, the final prayer is to the LORD God of hosts – Yahweh Elohim Tsavaot.  The answer is before us today.  He has personally shined His face upon His people, and is once again extending His grace towards us (Numbers 6:22). “Holy, holy, holy is the Lord God, the Almighty, who was, and who is, and who is to come” (Revelation 4:8). He was above the Mercy Seat between the cherubim as He gathered for Himself a people of covenant at Sinai. He is now enthroned above the cherubim shepherding scattered Israel, His flock. And He is coming “with power and great glory. And He will send forth His angels with a great trumpet and they will gather together His elect from the four winds, from one end of the sky to the other” (Matthew 24:30-31).

Father, we pray for the restoration of all Israel.
Revive us, and we will call upon Your name.
O Yahweh, God of hosts, restore us,
Cause Your face to shine upon us, and we will be saved.