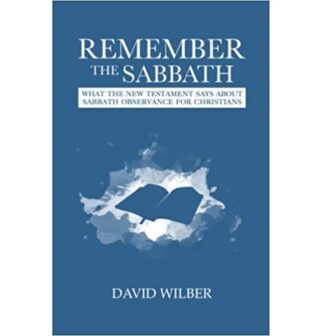 Most Christians are much more familiar with the New Testament than they are the Old Testament. And for many, the idea of keeping the Sabbath is an Old Testament concept. In New Testament times, the seventh-day Sabbath is either no longer important, replaced by Sunday, or relevant only to the Jewish people. It is not necessary to “remember the Sabbath.” But is this really true?

As the title suggests, this book by David Wilber looks at situations and teachings in the New Testament to frame a proper view of the Sabbath for Christians – those who wish to follow and be like Jesus Christ. These aren’t just Wilber’s thoughts on Scripture passages. He draws from leading scholars who have written on this topic, both for and against Sabbath-keeping. He presents his conclusions, and the reader can then decide whether or not they agree.

Wilber briefly addressed the Sabbath in his earlier book A Christian Guide to the Biblical Feasts. Remember The Sabbath is a more full treatise. 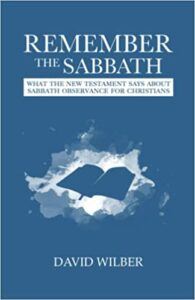 I recall a clear direction I was given in college for whenever I was going to make a presentation, and it is one I followed throughout my career. First, tell them what you are going to say. Then, say it. Finally, conclude by telling them what you said. David Wilber does just that in this book.

Remember The Sabbath is a well documented defense for why a follower of the Messiah should observe the seventh-day Sabbath. Wilber chooses to call him “Yeshua,”, Jesus’ given Hebrew name, but doesn’t make that a big deal. He begins by making a case for Sabbath observance in the New Testament. Then he presents the three most common reasons people give for NOT keeping the seventh-day Sabbath, followed by some “frequently asked questions” with brief, thoughtful answers. In his conclusion, he neatly summarizes everything you’ve just read, in the order you read it.

Like the prophets of the Old Testament (e.g., Isaiah 58:13), Yeshua spoke against the distortions of the Sabbath of his day and called for a return to genuine Sabbath observance in accordance with God’s will.
(Remember The Sabbath, p.19)

Based on our study of the New Testament’s teaching on the topic of Sabbath observance, it is clear that we should honor the Sabbath as Christians. The Sabbath, God’s day of rest, is a gift to mankind.
(Remember The Sabbath, p.181)

Remember The Sabbath is laid out in an easy-to-follow, well defined format, and that makes it an excellent resource you can go back to at any time. There is an “in summary” paragraph at the end of each subchapter heading, and a “Conclusion” section at the end of each chapter.

The target audience is clearly Christians, those who follow Jesus Christ / Yeshua the Messiah. The author doesn’t attempt to evangelize anyone, including Jewish readers, and neither does he try to convince Christian readers to become Jewish or even join the Hebrew Roots movement. Christian theology is assumed – Wilber, like most Christians, believes in salvation by grace through faith. He makes it very clear that Sabbath observance does not “save” anyone.

Obviously, the idea that Torah observance gets us into the kingdom contradicts the Biblical doctrine of salvation by grace through faith (Ephesians 2:8).
(Remember The Sabbath, P.19)

Everything is well documented, with a bibliography of 116 entries. This book has extensive footnotes, and throughout there are quotes from leading scholars, many of which those of us who have done this for a while will recognize. It isn’t patronizing; it is a sharing of thought that shows this isn’t just something the author came up with on his own. Scripture, especially New Testament scripture, is referenced frequently, and when it is a primary focus of the point discussed, Wilber prints the passage out for you to read. And these Scripture quotes are from the respected English Standard Version, not some “messianic” Bible that might tend to slant the words to promote an agenda.

I was surprised to see quotes from a couple of contemporary Christian leaders who, frankly, I personally dislike and avoid. Wilber quotes them with full references should the reader want to verify, put in context, or otherwise research what they have said. There are no ad hominem attacks; he sticks to the subject matter at hand and graciously but firmly states why he believes they are wrong. Again, it is up to the reader to decide if they agree.

Already Convinced About The Sabbath?

I have been keeping Sabbath for more than 20 years. Most of the reasons presented in this book and the arguments made are things I have heard many times. When I started reading this book, I was expecting a re-hash of those debates. Instead, I came across deeper things that make me want to dig a little further.

David Wilber offers an explanation of Colossians 2:16-17 that I’ve read frequently. However, he takes the time to delve much further into the passage than the brief answers I’ve heard (and given) in the past. He sets the full context of the first two chapters of Colossians, describing details of the “Colossian heresy” and how the real goal of these passages is uplifting the preeminence of Yeshua. This is a valuable study in itself.

Later, in discussing the objection that Sabbath was part of the “Old Covenant,” Wilber takes a step back to look at the whole book of Hebrews. He makes an in-depth examination of “covenant” and “priesthood” in a context that I had not really considered before. I’ve had people tell me you can’t understand Hebrews unless you understand the Temple. Or, you can’t understand Hebrews unless you read it with Yom Kippur in mind. The author here does not make that kind of blanket, non-answer statement. Instead, he presents the beginning of a study on priestly ministries that leaves the reader wanting to know more. Maybe Wilber’s next book will cover this topic in much greater detail (hint hint).

If there is one difficulty in defending the seventh-day Sabbath for Christians, it is that a lot of the evidence is, or is treated as, circumstantial. Such is the case in this book. Often I read the words “it seems (un)likely” or “this is (un)likely” or something similar. Circumstantial evidence is easily accepted by someone who already believes something, and is usually considered skeptical by someone who does not. But that’s just the way it is. When the command is given from Mount Sinai, “Remember the Sabbath,” it isn’t difficult to grasp. But those same, exact words aren’t repeated in the New Testament. All of the evidence shows that 1) New Testament believers did keep the Sabbath, and 2) the Sabbath command is part of what does not pass away and we are told to obey, even if not specifically stated. The circumstantial evidence is overwhelming, and any objections have to ignore it. David Wilber does a stellar job of bringing this out.

I can highly recommend Remember The Sabbath by David Wilber for any Christian considering what to do about Sabbath-keeping. It is also a great resource for those already keeping the Sabbath for answers to those who question them.

Remember The Sabbath: What the New Testament Says About Sabbath Observance for Christians

A Christian Guide to the Biblical Feasts

Our Passover Lamb – a Christian Haggadah

When Faith Works: Living Out the Law of Liberty According to James

2 thoughts on “Remember The Sabbath by David Wilber (Review)”