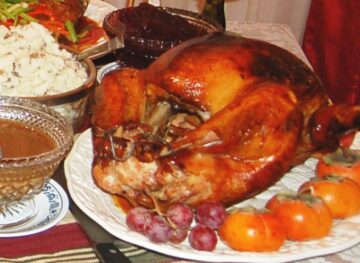 Thanksgiving is an American holiday observed on the fourth Thursday in November. Although there are a number of different stories explaining the origin, the most familiar is a day of thanksgiving by pilgrim settlers following a good harvest in the fall of 1621. It is clearly not one of the Biblical Feasts. Should believers in Yeshua observe this tradition?

Thanksgiving for a bountiful harvest is actually observed in a number of countries at various times. In Canada, it is the second Monday in October. In the United Kingdom, the harvest festival of Thanksgiving is traditionally held on or near the Sunday after the harvest moon (full moon) that occurs closest to the autumnal equinox. That sounds similar to the calculation for Easter. In Australia it is the last Wednesday in November, which happens to be in the Spring in the southern hemisphere. Obviously none of these dates are tied to the Jewish lunar calendar.

So, it isn’t one of the Biblical Feasts, nor is it in any way described in the Bible in the Old or New Testaments. It is a national, colloquial celebration. Whether or not a follower of Yeshua chooses to participate in it is simply a matter of personal choice. But make no mistake, “thanksgiving” or “giving thanks” is absolutely a Biblical concept.

Thanksgiving in the Tanakh (Old Testament)

There are two primary Hebrew words used in the Tanakh to express thanksgiving or giving thanks. One is a verb, yadah (Strong’s number H3034) meaning to give thanks, and the other is a noun, todah (Strong’s number H8426) meaning thanksgiving. And, of course, a Hebrew noun almost always comes from a Hebrew verb. In this case, todah is derived from yadah (according to Brown-Driver-Briggs).

The imperative or command form of yadah is hodu. We are commanded to “give thanks.” This is among the most recognizable phrases in Hebrew Bible – “Hodu l’Adonai” (or more accurately, “Hodu l’Yahweh“). The first time hodu is used is in 1 Chronicles 16:8.

Oh give thanks to the LORD, call upon His name; Make known His deeds among the peoples.
(1 Chronicles 16:8)

The first time yadah is used in Scripture is in Genesis 29:35.

And she [Leah] conceived again and bore a son and said, “This time I will praise [H3034] the LORD.” Therefore she named him Judah. Then she stopped bearing.
(Genesis 29:35)

According to the Theological Wordbook of the Old Testament, there is no actual Hebrew verb meaning “to thank.” Consider this entry under the root yadah (TWOT #847).

This verb was predominantly employed to express one’s public proclamation or declaration (confession) of God’s attributes and his works. This concept is at the heart of the meaning of praise. Praise is a confession or declaration of who God is and what he does. This term is most often translated “to thank” in English versions, but such is not really a proper rendering according to Westermann: In the Old Testament… there is as yet no verb that means only “to thank.” Hodah, which is usually translated as “to thank,” is not used in the Old Testament a single time for an expression of thanks between men. Thus it is clear from the start that this hodah cannot be equated with our “to thank,” which can be directed equally to God and to man. In those places in the O.T. where our “thank” as something taking place between men is most clearly found, the verb used is berek, which does not have the primary meaning of “praise” but means “bless.”

Thanksgiving in the New Testament

First, let’s take this Hebrew word, hodu, into Greek. In the Septuagint, hodu is translated using exomologeisthe, the imperative form of the Greek root word exomologeo, generally meaning to agree or confess. It is only used once (in this form), in James 5:16. A declarative (indicative) form is used in Matthew 11:25 and Luke 10:21 where Yeshua says “I thank you, Father…” according to the ESV and NKJV. Most other translations say, “I praise you, Father…”

So what are the Greek words used in the New Testament for “thanksgiving” or “giving thanks?” There are three, all related.

Those may sound familiar. They are the basis for the Christian terminology used for the celebration of the Lord’s Supper, the Eucharist.

There are more than fifty occurrences of these words in the Greek New Testament, always used in reference to an expression of gratitude and always translated as some form of the word “thank” (in the most widely used and accepted Bible translations). And yet, these words never appear in the Septuagint, the Greek translation of the Hebrew Bible. As previously stated, there is no Hebrew word for this expression of gratitude. Instead, giving thanks is always associated with praising or worshipping the one to whom gratitude is expressed.

Thanksgiving in the Psalms

Oh give thanks to the LORD, call upon His name; Make known His deeds among the peoples. Sing to Him, sing praises to Him; Speak of all His wonders.
(Psalm 105:1-2)

Praise the LORD! Oh give thanks to the LORD, for He is good; For His lovingkindness is everlasting.
(Psalm 106:1)

Oh give thanks to the LORD, for He is good, For His lovingkindness is everlasting.
(Psalm 107:1)

Give thanks to the LORD, for He is good; For His lovingkindness is everlasting.
(Psalm 118:1,29)

Give thanks to the LORD, for He is good, For His lovingkindness is everlasting.
(Psalm 136:1)

I will praise the name of God with song And magnify Him with thanksgiving.
(Psalm 69:30)

Enter His gates with thanksgiving And His courts with praise. Give thanks to Him, bless His name. For the LORD is good; His lovingkindness is everlasting And His faithfulness to all generations.
(Psalm 100:4-5)

Sing to the LORD with thanksgiving; Sing praises to our God…
(Psalm 147:7)

Thanksgiving in the Amidah

The next to last prayer or “benediction” in the Amidah, the daily Standing Prayer, is a prayer of thanksgiving.

We thank You, for You are ADONAI, our God and the God of our forefathers forever and ever. The Rock of our lives, the Shield of our salvation, You are in every generation. We thank You and tell Your glory for our lives which are in Your hands, and for our souls that are entrusted to You, and for Your miracles that are with us every day, and for Your wonders and favors that happen all the time, evening and morning and noon. The Good One, for Your compassion was not exhausted, and the Compassionate One, for Your merciful deeds have not ended; always have we put our hope in You. For all these, may Your name be blessed and exalted, our King, always, forever and ever; and all the living will thank You and praise Your name truly, O God, our salvation and help. Blessed are You, O LORD, the Good One is Your name, and You are proper to thank.

Based on several passages of Scripture, this prayer is the essence of the Hebrew concept of thanksgiving – or, praise. “We thank you, because everything is from you.” Thanksgiving and praise is offered because of who God is and how he works in our lives. And because of this, his name is blessed and exalted forever.

The prayer concludes by acknowledging God as “the good one.” Yeshua said, “no one is good except God alone” (Mark 10:18; Luke 18:19). He is the one who has called things “good” from the beginning. He is “the Good One,” who’s compassion is not exhausted and who’s merciful deeds have not ended.

As you celebrate Thanksgiving with your family or others around you, perhaps you will want to pray this prayer of thanksgiving from the Amidah. Remember that thanksgiving and praise belong to the One who is the source of all things, the Master of the Universe, HaTov Shimcha (“the Good One is your name).