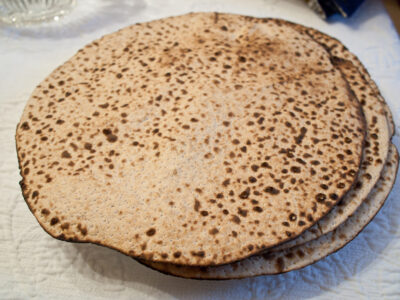 As we celebrate the seven days of Chag haMatzot, the Feast of Unleavened Bread, here are a few things to ponder regarding bread, leaven and the instructions we are given.

“Now this day will be a memorial to you, and you shall celebrate it as a feast to the LORD; throughout your generations you are to celebrate it as a permanent ordinance. Seven days you shall eat unleavened bread, but on the first day you shall remove leaven from your houses; for whoever eats anything leavened from the first day until the seventh day, that person shall be cut off from Israel” (Exodus 12:14-15).

There are three instructions in this passage. During the seven-day Feast of Unleavened Bread, we:

1. Eat unleavened bread
2. Remove leaven from our houses
3. Do not eat anything leavened

“Seven days you shall eat matzot…”

Matzot is the plural form of the Hebrew word matzah (Strong’s number 4682), identified in Brown-Driver-Briggs lexicon as “unleavened bread or cakes.” The Hebrew feminine noun occurs about fifty times in Scripture, thirty of them in the Torah. The Expository Dictionary of Biblical Words (Renn) says it “refers exclusively to unleavened bread.” That is pretty straightforward. We are to eat matzah for the seven days of this feast.

According to Brown-Driver-Briggs, se’or is a masculine noun meaning “leaven.” Nothing more is said about it. The word occurs five times in Scripture, all of them in the Torah and all of them in the context of prohibition. Again, this is pretty straightforward. We are to remove leaven from our homes.

Of course, in ancient Israel they did not have the convenient little single packages of Fleischmann’s or Red Star active dry yeast that foam in a matter of minutes with warm water and sugar. Think sourdough, a lump of flour and water that ferments with the yeast spores naturally occurring in the air. Removing se’or from your home meant doing away with the starter batch. Forget the 18-minute rabbinic rule to determine whether or not something is “leavened.” Making real leavened bread after the seven days ended meant starting from scratch and was a lengthy process.

Removing the leaven is an interesting concept. The root Hebrew verb translated “you shall remove” is shabat (Strong’s number 7673 in the hiphil stem) meaning “to cause to cease, to put an end to, to exterminate, to destroy, to cause to desist from, to remove, to cause to fail.” You can no doubt see a similarity here; the Hebrew noun shabbat, the Sabbath, the seventh day of the week, is derived from this verb. The verb occurs more than seventy times in Scripture and eighteen times in the Torah. Most of the Torah references are to resting on the Sabbath. The naturally occurring yeast and it’s interaction with wet flour is cease and desist during this feast. Already fermenting old dough is to be destroyed. The entire process is to rest.

Chametz here is a Hebrew noun meaning something leavened (Strong’s number 2557), always in the context of grain or bread. It occurs thirteen times in Scripture, twelve of which are in Torah. It is also a verb meaning “to be leavened, to be sour” (Strong’s number 2556). Remember that in the Hebrew language nouns are derived from verbs. Once again, this is a straightforward instruction. We are not to eat anything made with leaven.

Here are a couple of other things of note, though the words are not used in this passage. Lechem (Strong’s number 3899) is the common Hebrew word for bread, used almost three hundred times in Scripture. It can mean either leavened or unleavened bread. And on the Sabbath, many of us bake the traditional Challah loaves and celebrate Kiddush (sanctification) with bread and wine.  In the Scriptures, challah (Strong’s number 2471) is always translated as “cake,” can either be leavened or unleavened, and likely is not similar to the modern braided loaves we make now. In the account of Melchizedek and Abraham in Genesis 14, from which the Kiddush is said to have originated, Melchizedek brought out bread (lechem) and wine, not challah – though chocolate cake and merlot is also considered to be a good pairing.

“You shall also count for yourselves from the day after the Sabbath, from the day when you brought in the sheaf of the wave offering; there shall be seven complete Sabbaths. You shall count fifty days to the day after the seventh Sabbath; then you shall present a new grain offering to the LORD. You shall bring in from your dwelling places two loaves of bread for a wave offering, made of two-tenths of an ephah; they shall be of a fine flour, baked with leaven as first fruits to the LORD” (Leviticus 23:15-17).

Less than seven weeks from the end of the Feast of Unleavened Bread we celebrate Shavuot, the Feast of Weeks (Pentecost). At that time, we are told to bring two very large loaves of bread made with chametz. Since all leavened dough was removed during the Feast of Unleavened Bread, at the conclusion it would be necessary to start a new batch of dough and go through the process of letting it ferment and become leavened. The two leavened loaves presented at Shavuot are made from the new batch of dough that began as an unleavened lump after Passover and at the end of the Feast. The old lump of dough has been removed. This brings a point of clarity to Paul’s exhortation when he writes:

“Clean out the old leaven so that you may be a new lump, just as you are in fact unleavened. For Christ our Passover also has been sacrificed” (1 Corinthians 5:7).

Count the days of the Omer, the wave sheaf, and prepare yourself as a “new lump” to grow in preparation for Shavuot, the Feast of Weeks.