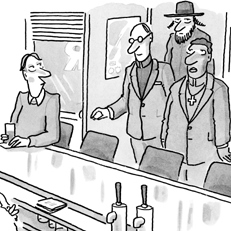 A priest, a rabbi and a minister walk into a bar on Saint Patrick’s Day. Each takes a seat at the bar and grabs a handful of pretzels. They talk for a while, then the bartender comes over and says, “Welcome to The Historical Present.”

Now, if you thought you were reading a joke and are waiting for the punchline, you will be disappointed. It’s just a narrative about three guys in a bar called The Historical Present. It is told in a way that is meant to bring the reader into the setting as if it is happening right now, even though it clearly states this is something that took place in the past on Saint Patrick’s Day. The verbs are in the present tense. As you might have guessed, this is a grammatical form known as the “historical present.” And yes, that sounds a bit like an oxymoron.

The Historical Present In Scripture

Why would I bring this up here? Because I have just finished reading through all four Gospels in the Tree of Life Version and this grammatical form is all through them, some more than others. I found it awkward and at times a little annoying, but it is an accurate rendering of what the Greek text actually says. Consider the beginning of this story from the book of Matthew:

After six days, Yeshua takes with Him Peter and Jacob and John his brother, and brings them up a high mountain by themselves. Now He was transfigured before them; His face shone like the sun, and His clothes became as white as the light (Matthew 17:1-2 TLV).

Notice the present tense verbs, “takes” and “brings.” After that, the entire story is in the past tense. The same verb forms are used in this story in Mark (some have suggested a common unknown source for both Matthew and Mark), however in Luke’s account the story is told completely in the past tense.

After six days, Yeshua takes with Him Peter and Jacob and John, and brings them up a high mountain by themselves. And He was transfigured before them (Mark 9:2 TLV).

About eight days after these teachings, Yeshua took Peter, John, and Jacob with Him and went up the mountain to pray. While He was praying, the appearance of His face changed, and His clothing flashed like white lightning (Luke 9:28-29 TLV).

Most modern translations change the tense of these verbs in order to make the text more readable. Consider the New International Version and the Complete Jewish Bible:

After six days Jesus took with him Peter, James and John the brother of James, and led them up a high mountain by themselves (Matthew 17:1 NIV).

My preferred translation, the New American Standard Bible, also changes these verbs to past tense. The NASB is generally considered the most literal translation in common usage, even more so than the King James Version. Here is the interesting way this passage is shown (you may need a printed copy to see this, as most electronic versions don’t show it this way):

Six days later Jesus *took with Him Peter and James and John his brother, and *led them up on a high mountain by themselves. And He was transfigured before them; and His face shone like the sun, and His garments became as white as light (Matthew 17:1-2 NASB).

The New American Standard Bible identifies verbs that are in the historical present tense in Greek even though it translates them in the past tense for better readability. I like that. This note is in the front of the Bible in the Explanation of General Format:

A star (*) is used to mark verbs that are historical presents in the Greek which have been translated with an English past tense in order to conform to modern usage. The translators recognized that in some contexts the present tense seems more unexpected and unjustified to the English reader than a past tense would have been. But Greek authors frequently used the present tense for the sake of heightened vividness, thereby transporting their readers in imagination to the actual scene at the time of occurrence. However, the translators felt that it would be wise to change these historical presents to English past tenses.

The King James Version translates in the historical present tense, however due to the archaic verb forms most of us don’t recognize it because we don’t normally use them.

And after six days Jesus taketh Peter, James, and John his brother, and bringeth them up into a high mountain apart, And was transfigured before them: and his face did shine as the sun, and his raiment was white as the light (Matthew 17:1-2 KJV).

In this archaic English from the late 15th to late 17th centuries, more accurately termed Early Modern English, the “-eth” ending is the third person singular present tense verb form. Today, it is often just the letter “s,” so taketh becomes takes, and bringeth becomes brings. But since we don’t commonly used these older verb forms, it isn’t as obvious.

Here is another example from the TLV, NASB and KJV. Notice how the NASB uses the star (*) to indicate the use of historical present tense in Greek while employing the more comfortable past tense in the translation.

When Yeshua had crossed over in the boat again to the other side, a big crowd gathered around Him; and He was by the sea. Then one of the synagogue leaders, named Jairus, comes. Seeing Him, he falls at His feet. He begs Him a great deal, saying, “My little daughter is near death! Come and lay hands on her so that she may be healed and live!” So Yeshua went off with him, and a big crowd was following Him and pressing upon Him (Mark 5:21-24 TLV).

When Jesus had crossed over again in the boat to the other side, a large crowd gathered around Him; and so He stayed by the seashore. One of the synagogue officials named Jairus *came up, and on seeing Him, *fell at His feet and *implored Him earnestly, saying, “My little daughter is at the point of death; please come and lay Your hands on her, so that she will get well and live.” And He went off with him; and a large crowd was following Him and pressing in on Him (Mark 5:21-24 NASB).

And when Jesus was passed over again by ship unto the other side, much people gathered unto him: and he was nigh unto the sea. And, behold, there cometh one of the rulers of the synagogue, Jairus by name; and when he saw him, he fell at his feet, And besought him greatly, saying, My little daughter lieth at the point of death: I pray thee, come and lay thy hands on her, that she may be healed; and she shall live. And Jesus went with him; and much people followed him, and thronged him (Mark 5:21-24 KJV).

Even though to me it is sometimes awkward and uncomfortable in contemporary English, it seems this usage is fairly normal in Greek, which has different verb conjugations than English. One source quotes The Encyclopedia of Ancient Greek Language and Linguistics as saying, “The ‘historical present’ describes the use of a present tense indicative form in a narrative where the aorist would be expected. The effect of its discontinuity with the other, preterite, verbs in the story usually marks out the main action of the event.” That’s way over my head, so I rely on the Grammatical Codes section of my Key Word Study Bible to tell me what all that means. In the end, it is a bunch of head knowledge about the original language that really doesn’t help me that much.

I came across a much more down-to-earth explanation in the book Greek To Me by Cullen IK and J. Lyle Story. “Hence, the present tense (historical present) may give, at times, a vivid and dramatic quality to the narrative.” With that thought in mind, consider this passage from John that took place at Yeshua’s final Passover.

Yeshua knew that the Father had given all things into His hands, and that He had come from God and was returning to God. So He gets up from the meal and lays aside His outer garment; and taking a towel, He wrapped it around His waist. Then He pours water into a basin. He began to wash the disciples’ feet, drying them with the towel wrapped around Him.
Then He comes to Simon Peter, who says to Him, “Master, are You going to wash my feet?”
Yeshua responded, “You don’t know what I am doing now, but you will understand after these things.”
Peter said to Him, “You shall never wash my feet!”
Yeshua answered him, “If I don’t wash you, you have no part with Me.”
Simon Peter said to Him, “Master, then not only my feet, but also my hands and my head!”
Yeshua said to him, “He who has bathed has no need to wash, except the feet; he is completely clean. And you all are clean, though not every one” (John 13:3-10 TLV).

This is a great example of how the Tree of Life Version is more literally translating the text than some of the other Messianic translations, which are also good and helpful in different ways. I’ve enjoyed reading through the TLV this year, as I like to fully read a different translation every year. When I run across things that seem different or puzzling, I like to check them with a good interlinear Bible (I’m still using my reliable BibleSoft PC Study Bible software from back in 2002, still working in Windows 10!). And in English, I’m primarily sticking with my New American Standard Bible for now.