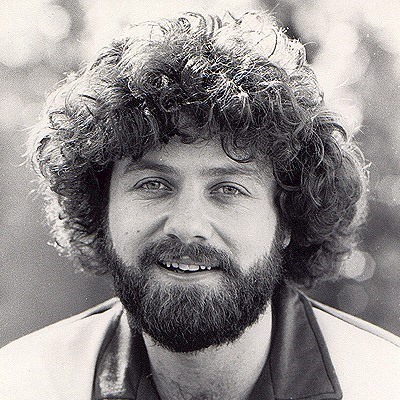 I purchased my first Keith Green album, No Compromise, in 1979. There may have been a song I heard from it on the radio, or maybe it was just the unique album cover that attracted my attention. I got it from a local Christian book store that used to sell everything in the store for half-price a few days after Christmas.

The album jacket opened like a book, with the lyrics to the songs and other credits printed on the inside. Then inside the pocket, separate from the plain sleeve containing the 12-inch vinyl record, was a 10-inch by 10-inch paper insert. Printed on one side was Keith’s testimony beginning with “It was in the spring of 1973 that I first prayed to Jesus…” and on the other side was a continuation of the story describing “The Birth of Last Days.” After reading it, I signed up for the Last Days Newsletter, published by the Last Days Community that Keith and his wife Melody had formed.

I remember sharing this with my dad, who probably was a little bit skeptical. But after checking it out, a short while later he, too, subscribed to the Last Days Newsletter and, to my surprise, bought Keith Green’s first album, For Him Who Has Ears To Hear. I will never forget listening to and talking about these songs and the newsletters with my dad in his “man cave” way before that was a popular term.

Now, wait, why are we talking about a popular contemporary Christian singer on a Messianic blog? Keith Green wasn’t a Sabbath or Feast keeper. In fact, the song To Obey Is Better Than Sacrifice makes reference to church on Sunday and on Wednesday night. I’ve never read anything to make me think he followed the dietary laws. And he sure talks a lot about “God” and “Jesus.”

Maybe, just maybe, we are focusing on the wrong things. Maybe we are the ones straining out gnats and swallowing camels, just like Yeshua said about the … well, you know, those guys.

“Woe to you, scribes and Pharisees, hypocrites! For you tithe mint and dill and cumin, and have neglected the weightier provisions of the law: justice and mercy and faithfulness; but these are the things you should have done without neglecting the others. You blind guides, who strain out a gnat and swallow a camel!” (Matthew 23:23-24)

That brings to mind another passage I recently read in the Haftarah portion:

With what shall I come to the LORD
And bow myself before the God on high?
Shall I come to Him with burnt offerings,
With yearling calves?
Does the LORD take delight in thousands of rams,
In ten thousand rivers of oil?
Shall I present my firstborn for my rebellious acts,
The fruit of my body for the sin of my soul?
He has told you, O man, what is good;
And what does the LORD require of you
But to do justice, to love kindness,
And to walk humbly with your God?
The voice of the LORD will call to the city–
And it is sound wisdom to fear Your name:
“Hear, O tribe. Who has appointed its time?
(Micah 6:6-9)

Keith Green’s life and his music reflect the values that God himself said were important. Keith died in a small plane crash in 1982 at the age of 28. Had he lived, perhaps the Holy Spirit would have brought him to a deeper understanding of God’s covenant. Or it could be that God took him before he might have been led astray. We will never know. His purpose on earth was complete.

The righteous man perishes, and no man takes it to heart;
And devout men are taken away, while no one understands.
For the righteous man is taken away from evil,
He enters into peace;
They rest in their beds,
Each one who walked in his upright way.
(Isaiah 57:1-2)

There have been many well-known and no doubt multitudes of unknown Christians who have pursued a life of holiness without their hearts being awakened to things like the Sabbath, the covenant of Torah or the reunification of Israel.

How did you come to this knowledge? If in recent years, it is very likely that you or the person who introduced you to this walk learned through some form of modern technology or media. But remember, public use of the internet and the World Wide Web didn’t catch on until the late 1990s, and “social media” at least a decade later.

John answered and said, “Master, we saw someone casting out demons in Your name; and we tried to prevent him because he does not follow along with us.” But Jesus said to him, “Do not hinder him; for he who is not against you is for you” (Luke 9:49-50).

It is not our place to reject someone serving Jesus/Yeshua who “does not follow along with us.”

Keith Green actually was ethnically Jewish, as is his wife who survives him, Melody. His bio on the Last Days Ministries web site says:

Keith had grown up reading about Jesus in the bible, but was confused when he figured out he was Jewish, a fact his family had hidden from him. But now what once confused him made sense as Keith proudly told the world, “I’m a Jewish Christian.”

You can read more about him in a book written by Melody Green in 1989 titled No Compromise – The Life Story of Keith Green. I highly recommend it.

Some of My Favorite Keith Green Songs

Links are for CDs at Amazon. You can also download them as MP3.

For my post about the Keith Green song we do at the prison where I minister, go here.

The second song on the No Compromise album, Make My Life A Prayer To You, was actually written by Keith’s wife, Melody. The title to the album comes from one line in this song. If you don’t listen to any other song listed here, listen to this one.

Probably one of the most well-known songs from Keith Green is O Lord You’re Beautiful. It was originally released on his album So You Wanna Go Back To Egypt, which he gave to anyone who wanted it for whatever they could afford to give. Keith had asked to be released from his contract with Sparrow Records, following the instructions of the Messiah, “Freely you received, freely give” (Matthew 10:8). Both this album and Songs For The Shepherd were given away.

The familiar song original released in 1980 is a studio recording. It is also on a CD released posthumously titled O Lord You’re Beautiful – Songs of Worship. On this live recording of the song, he describes writing a letter to the Lord the week before, saying “I didn’t know where to mail it, so I put it in my Bible.” There are lyrics on this early recording that didn’t make it into the later version.

Here are the lyrics recorded on the Egypt album:

Oh Lord, You’re beautiful
Your face is all I seek
For when Your eyes are on this child
Your grace abounds to me

I wanna take Your word and shine it all around
But first help me just to live it, Lord
And when I’m doing well help me to never seek a crown
For my reward is giving glory to You

Oh Lord, please light the fire
That once burned bright and clean
Replace the lamp of my first love
That burns with holy fear

I mentioned earlier that my first Keith Green purchase was his second album, No Compromise, and that my dad later bought his first album, For Him Who Has Ears To Hear. As I listened to this one with my dad, I was surprised to hear a song I already knew but that was recorded by someone else. Phil Keaggy recorded the song Your Love Broke Through in 1977, but I did not realize it was a Keith Green song – in fact, back then I had never heard of Keith Green. Now I was hearing it by the original composer (along with Todd Fishkind and Randy Stonehill).

The Keith Green Collection was released in 1981 and contained mostly songs from the first three albums, along with live versions of both new and previously recorded songs from a World Vision concert in 1979. One of my favorites is Rushing Wind, a live performance with an incredible piano segue into the studio version of You Put This Love In My Heart. The transition from live to studio is a little awkward, but it works.

Rushing wind blow through this temple
Blowing out the dust within
Come and breathe Your breath upon me
I’ve been born again
Holy Spirit, I surrender, take me where You want to go
Plant me by your living waters
Plant me deep so I can grow

Another very convicting track on this album is Keith’s telling of the parable of The Sheep And The Goats from Matthew chapter 25, performed live with his unique piano style. It segues into the song Asleep In the Light, which also transitions from live to studio halfway through.

Songs For The Shepherd, released in April 1982, was his final album before his death on July 28 of that year. The first track is a beautiful recording of The Lord Is My Shepherd (Psalm 23), accompanied by the London Philharmonic Orchestra.

Another of my favorites on this album is a hymn written by Melody Green, There Is A Redeemer.

Here is the Christian discography:

So You Wanna Go Back To Egypt (Pretty Good Records, 1980)

I Only Wanna See You There (Sparrow Records, 1983)

Because Of You – Songs of Testimony (Sparrow Records, 1998)

Make My Life A Prayer To You – Songs of Devotion (Sparrow Records, 1998)

1 thought on “The Songs of Keith Green”