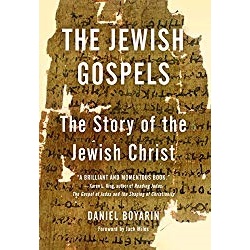 In an earlier post I addressed whether or not the Allah of Islam is the same as Yahweh, the God of Israel. This gave rise to another question – do Jews and Christians worship the same God? To answer that question, we need to determine whether or not Judaism and Christianity are, in fact, two different religions.

Recently I read a book titled The Jewish Gospels by Daniel Boyarin. The author is from Rabbinic Judaism and not a believer in Yeshua as Messiah. I’ve read other writings by Jewish authors about the historical Jesus and the stories in the Gospel accounts of his life. However, this one was different. Boyarin presents the culture of the Gospels not just from the idea that the Jewish people were expecting a messiah, but that many were expecting a divine messiah.

The Jewish Gospels
The Story of the Jewish Christ

Writing primarily from passages in the book of Mark in the New Testament and the book of Daniel in the Hebrew Tanakh/Old Testament, the author focuses on the concept of the “son of man.” A common perception is that “Son of God” is a divine title and “Son of Man” a human title, when in fact those in Biblical times would have understood the exact opposite. Using the words of Daniel 7, he demonstrates how the Jews of the first century BCE were looking for and expecting a divine messiah.

I kept looking in the night visions,
And behold, with the clouds of heaven
One like a Son of Man was coming,
And He came up to the Ancient of Days
And was presented before Him.
And to Him was given dominion,
Glory and a kingdom,
That all the peoples, nations and men of every language
Might serve Him.
His dominion is an everlasting dominion
Which will not pass away;
And His kingdom is one
Which will not be destroyed.
(Daniel 7:13-14 NASB)

Working mostly from the Gospel of Mark, the author puts forth the idea that Jesus fits the concept, prophecies and understanding of the divine “Son of Man.” The question among his contemporaries wasn’t whether or not the Messiah was a divine figure, but whether or not Jesus was the one. The author draws on extra-biblical passages from pseudepigrapha (Enoch) and apocrypha (Esdras) and looks at other Messianic or Son of Man figures in that time period. He states Jews “had concluded that the Redeemer would be a divine figure named the Son of Man and would come to earth as a human, save the Jews from oppression, and rule the world as its sovereign. Jesus seemed to many to fit that bill.”

Boyarin goes to great lengths, often repetitive, to show that Jesus and his followers were fully Jewish. This book is only four chapters, and one of them is devoted to examining the passage in Mark where Jesus “declared all foods clean.” According to Boyarin, Jesus and his followers kept kosher, and what actually was taking place here was a disagreement over the rules within different factions of the Jewish faith rather than an abrogation of Torah commandments.

The author challenges the contemporary Jewish assertion the suffering servant of Isaiah 53 is the nation of Israel or the Jewish people. Boyarin recognizes that Jesus is referring to Isaiah 53:3 when he said “the Son of Man must suffer many things, and be rejected.” According to Boyarin, an honored Talmudic scholar who is not a believer in Jesus Christ (in the Christian sense), one doesn’t need to be a Christian to see that Isaiah 53 is about the Messiah. In fact, he states “it is as plausible to assume that Jews held this view of the vicarious suffering of the Messiah and his atoning death, as predicted by the Prophet Isaiah before Jesus’ own suffering and death, as it is to assume that Christians made it up after the fact.”

What he shows here is that the story of the Gospels is completely Jewish, accurately fits the culture of the day, and should be read and understood with that mindset.

This book is well documented, with a large part of it just footnotes/endnotes (I admit I did not read or look up all of the notes). It is also very well indexed should one wish to go back to some specific thought. I found it very interesting that most of his Bible quotes appear to come from the Revised Standard Version, a Christian translation (of course this is necessary for the New Testament) though I could not find the quoted source named.

So, back to the original question…

Do Jews and Christians worship the same God?

I put that qualifier “for the most part” because there are or have been fringe beliefs that violate that statement. For example, in the second century CE a “Christian” heretic known as Marcion of Sinope claimed the mean God of the Old Testament was not the same as the loving God of the New Testament. Others in both the Jewish and Christian faiths have distorted their perception of One True God to the point he becomes a fictional character like the Muslim Allah. The same can be said about various views and distortions of Yeshua. We generally refer to them as “cults” without recognizing how that term can apply to any of us.

Boyarin states, “the ideas about God that we identify as Christian are not innovations but may be deeply connected with some of the most ancient of Israelite ideas about God.” This, I believe, is because both Jews and Christians believe and draw inspiration from the Hebrew Bible – what Jews call the Tanakh and what Christians call the Old Testament.

Unlike Muslims, Christians and Jews do worship the same God, Yahweh.