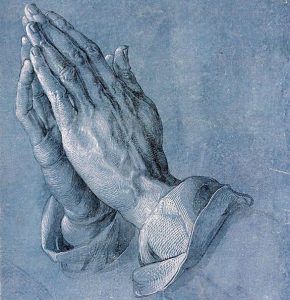 The most well-known prayer in the Brit Chadashah (New Testament) is commonly called The Lord’s Prayer, part of Yeshua’s teaching in the Sermon on the Mount. It has been called by various different names, such as The Model Prayer or The Disciple’s Prayer. Here I will just call it The Lord’s Prayer to avoid confusion.

Christian’s have recited this prayer for centuries, typically from the King James Version of the Bible.

Our Father which art in heaven,
Hallowed be thy name.
Thy kingdom come.
Thy will be done in earth, as it is in heaven.
Give us this day our daily bread.
And forgive us out debts, as we forgive our debtors.
And lead us not into temptation, but deliver us from evil:
For thine is the kingdom, and the power, and the glory, for ever.
Amen.
(Matthew 6:9-13 KJV)

Scholars are divided on the identity of Yeshua’s audience for this teaching. Was it just a small group of disciples? “Seeing the crowds, he went up on the mountain, and when he sat down, his disciples came to him” (Matthew 5:1). Or was it a large crowd of people? “And when Jesus finished these sayings, the crowds were astonished at his teaching” (Matthew 7:28). Perhaps Yeshua left the large crowd with his disciples and went to the mountain, only to have the crowds follow him there.

An almost identical prayer (minus the “doxology” ending – more on that later) is recorded in the Gospel of Luke. This comes in a different time and location and in response to a specific request from his disciples, “Lord, teach us to pray” (Luke 11:1).

Our Father which art in heaven,
Hallowed be thy name.
Thy kingdom come.
Thy will be done, as in heaven, so in earth.
Give us day by day our daily bread.
And forgive us our sins; for we also forgive every one that is indebted to us.
And lead us not into temptation; but deliver us from evil.
(Luke 11:2-4 KJV)

These are models, instructions as to how to pray. As such, this pattern has become a part of the worship service in many churches.

As a youngster, I attended churches that recited The Lord’s Prayer during the service. I remember a discrepancy – not a huge one – as some people said “forgive us our debts, as we forgive our debtors” while others said “forgive us our trespasses, as we forgive those who trespass against us.” The Bible I used said “debts,” and I wondered where the word “trespasses” came from.

The Lord’s Prayer, when used in traditional Christian liturgy, comes from the Book of Common Prayer, and this rendition uses the word “trespasses.” It may be that this word was picked up from the explanation that follows the prayer in the Sermon on the Mount, where Yeshua says, “For if ye forgive men their trespasses, your heavenly Father will also forgive you” (Matthew 6:14 KJV), although different Greek words are used in the prayer in Matthew 6:12 and the explanation in Matthew 6:14.

The well-known traditional ending to The Lord’s Prayer actually does not appear in the earliest manuscripts of the Gospel of Matthew. This doxology, “For thine is the kingdom, and the power, and the glory, for ever” is not found in the older Alexandrian text, which is used for most contemporary translations. It is in the manuscripts of the later Byzantine text, the basis for the Textus Receptus used for the King James Version. Most Bible scholars do not consider it part of the original writing.

Possibly the first known use of the doxology ending for The Lord’s Prayer is found in the Didache, which may date back to first century C.E. Didache is a Greek word meaing “teaching,” and this work is also known as The Teaching of the Twelve Apostles. If it is authentic, it may give us this prayer the way the disciples of Yeshua recited it years later, and not necessarily the exact way Yeshua said it. It is written in Greek, having a striking similarity to Matthew with the addition of the last line, “for yours is the power and the glory for ever and ever” (Didache 8:2, English translation by J.B. Lightfoot).

There are a few different renderings of this prayer in Hebrew. It is not my intention here to make a case for or against Hebrew, Aramaic or Greek primacy of any New Testament writing, including the Gospel of Matthew. It is likely that any copy we have today of a Hebrew Matthew is not what was originally written. We are reading translations from copies of copies, and scholarly opinions about them abound.

According to hebrewgospel.com, it is believed Matthew first wrote his gospel in Hebrew and then himself made a Greek translation, probably an expanded version. Few Christians outside of Israel could read Hebrew. The Greek version would have circulated along with the other Gospels, which were also in Greek. Eventually the original form of the Hebrew Matthew disappeared from lack of use.

Many Messianic congregations incorporate Hebrew liturgy into their worship. Often this includes traditional readings from the Siddur, the majority of which are taken from the Hebrew Scriptures. Most also include some sort of messianic reference, such as the Blessing of Messiah. Since The Lord’s Prayer is the one Yeshua used for instruction in how to pray, I think it is appropriate to include it in our worship.

Here is The Lord’s Prayer in Hebrew taken from the Modern Hebrew New Testament, published by the Bible Society in Israel in 2010. You can order a printed copy at www.biblesocietyinisrael.com. You can also read using TheWord free Bible software or YouVersion online or through their mobile app. With YouVersion, you can actually hear the passage read in Hebrew, which is a big help if you want to learn it.

To hear Matthew 6 read in Hebrew, click here.  The Lord’s Prayer begins at about the 1:40 mark.

Here is another version of The Lord’s Prayer from the Salkinson-Ginsburg Hebrew New Testament. It includes the doxology.  This translation is available in e-Sword free Bible software.

The Lords Prayer with doxology - Salkinson-Ginsburg

I have made no attempt here at theological analysis or interpretation of this prayer, or of its relationship to other Hebrew prayers such as the Amidah. I encourage you to do further research.