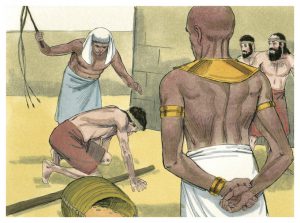 That’s probably what the Israelites thought when they heard those words. Things had gone from bad to worse since Moses had appeared on the scene. Now he says God is going to deliver them.

Of course, hind sight is 20/20. God’s promise in Exodus 6:-6-8 will become the basis for the four cups of wine used in the annual Passover celebration. This would be the premier memorial feast of the Jewish people – recited to the children every year. This would be the appointed time depicting redemption through the Messiah, the celebration of which Yeshua said, “do this in remembrance of me.”

Israel was about to be delivered, but it got off to a rough start – discouragement. Freedom was the farthest thing from their minds. The very next verse, immediately following this great declaration of what the God of Israel was about to do, shows the depth of their despair.

Moses spoke thus to the people of Israel, but they did not listen to Moses, because of their broken spirit and harsh slavery. (Exodus 6:9 ESV).

Commentary on this verse in the Stone Edition Chumash says they “did not respond favorably to Moses’ new assurance. As understood by most commentators, however, the verse explains that their negative attitude was due not to lack of faith, but to the difficult physical and emotional circumstances under which they labored.”

Discouragement can plague anyone, even those with strong faith. Circumstances can get us down.

They were tasked with making bricks. Bricks do not occur naturally in creation; they are entirely man-made. God doesn’t make bricks – we do. Sometimes we make them on our own, and sometimes we make them under compulsion. The bricks are the physical and emotional circumstances that bring a broken spirit and the discouragement that drags us down.

Moses spoke thus to the people of Israel, but they did not listen to Moses, because of their broken spirit and harsh slavery. (Exodus 6:9).

The Hebrew word translated “listen” is from the Hebrew root shama, Strong’s number 8085. We talk about this word a lot in Hebrew Roots circles. It is the first word in the Sh’ma, Deuteronomy 6:4, which Yeshua said is the most important commandment (Mark 12:29).

The word has a much deeper meaning than just “listen” or “hear.” The Theological Wordbook of the Old Testament lists five meanings for this root:

The Israelites in Egypt were discouraged – their spirits were broken – because of the harsh slavery (ESV), cruel bondage (NASB) and hard work (Stone). God was speaking to them through Moses, but their circumstances had them down. Because of that, they could not hear anything Moses had to say.

Yeshua used a parable about seeds to illustrate how circumstances keep us from really hearing.

Other seeds fell among thorns, and the thorns grew up and choked them… As for what was sown among thorns, this is the one who hears the word, but the cares of the world and the deceitfulness of riches choke the word, and it proves unfruitful (Matthew 13:7,22 ESV).

He brings us the words of life (John 6:68) but our broken spirit, despondency and discouragement keep us from hearing. It isn’t a lack of faith; it is focusing on what is around us.

He heals the brokenhearted…
Psalm 147:3

The LORD is near to the brokenhearted
And saves those who are crushed in spirit.
Psalm 34:18

Things turned around for the Israelites when they stopped looking at what was happening to them and started looking at what God was doing. When it was time to leave Egypt, they were ready. Likewise, we can expect discouragement to leave when we change our focus. Then we can truly hear (shama).

Therefore, since we are surrounded by so great a cloud of witnesses, let us also lay aside every weight, and sin which clings so closely, and let us run with endurance the race that is set before us, looking to Yeshua, the founder and perfecter of our faith (Hebrews 12:1-2 ESV).