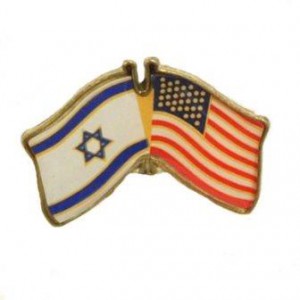 Today I am wearing my “Together We Stand” T-shirt. As I write this, it is the 4th of July, the American Independence Day. My shirt pictures the flags of Israel and the United States of America. Across the top of the images is the word JERUSALEM in blue, except that the middle letters USA are in red, white and blue. It is intended to promote the relationship between my native country and the nation of Israel.

Now, the notion that there is any linguistic or etymological relationship between “United States of America” and “Jerusalem” is silly, and the letters USA clearly cannot be found anywhere in the word ירושלים. Even the transliteration of the Hebrew word, Yerushalayim, doesn’t have that character sequence. All we have is a modern acronym and the same sequence of letters appearing in the middle of the English rendition of the name of the Holy City. It can effectively convey a desired relationship between our two countries, but don’t think for a minute that this is some divinely inspired hidden clue to prophecy.

America in the Bible

Sometimes it seems as if a fascination with end-time prophecy overtakes us. I have heard and read many teachers who proclaim the role and fate of the United States in end-time events, and they base these predictions on what they have found in Scripture. They will point to passages in Revelation, Daniel, Jeremiah and elsewhere. Usually the referenced prophecies speak of Babylon, Israel, Ephraim, Manasseh, or an eagle, each of which are interpreted as being the United States – at least in the instances where it fits the teacher’s scenario.

Here is an exhaustive list of every time America or the United States is specifically mentioned in Scripture:

Of course, the USA as an entity did not exist when Scripture was penned. Are there references that might be speaking of the USA? It might be possible. Is President Trump, or Obama or Bush or any of the other men who have held that office, mentioned in Scripture? I highly doubt it. Yet we somehow find a way to project our current political situation, whatever it is, into Biblical prophecy.

Signs of the Times

I do believe that we are in the “end times.” I believe the Great Tribulation, the regathering of Israel, the return of Yeshua and His millennial reign are very near. Those statements tell you a little about my eschatological views, and you may or may not agree. A few years ago, I didn’t see all things the way I see them now. And guess what, a few years from now I will probably understand some of them differently than I do today. God’s plan is not subject to what I think, understand or misunderstand about it.

There is a pretty cool solar eclipse coming up later next month, and an unusual alignment of planets and stars in September. Signs in the heavens? Yes, certainly God uses His heavens to produce signs and get our attention. Are any of these some specific sign prophesied in Revelation or another Bible passage? I don’t know; they might be. After they have happened and we look back on them, perhaps we will know. Or it could be they will just create a lot of attention, maybe help sell a few books, and then be forgotten like the recent four blood moons.

What Is the Purpose of Prophecy?

The warnings and judgments pronounced in Biblical prophecy are not so that we can predict the future. They are to call us to repentance. Some speak of future events including the return of Messiah Yeshua, assuring us that God will accomplish His purpose regardless of how we think we understand it, and calling us to repent and live so that we are in right standing with Him when that time comes. Others speak of past events, things we can observe and know that God does execute His judgments, and so we can see the outcome of when repentance did or did not take place. And many point directly to the first advent of the Messiah who came “to seek and to save that which was lost” (Luke 19:10). His message? “From that time Jesus began to preach and say, “Repent, for the kingdom of heaven is at hand” (Matthew 4:17).

Is the United States mentioned in the Bible? There may be some allusion to it. But Biblical prophecy is, for the most part, about Israel. The blessings, the promises, the warnings and the instructions are for Israel and those who choose to follow the God of Israel. And Yeshua said that He “was sent only to the lost sheep of the House of Israel” (Matthew 15:24). The New Covenant is “with the House of Israel and with the House of Judah” (Jeremiah 31:31, Hebrews 8:8).

We need to be less concerned about finding the United States in the Bible and make certain that we become “former” gentiles (Ephesians 2:8-13) and find our place in Israel, in Messiah Yeshua, heeding the call to repentance. John the Baptist said, “bear fruits in keeping with repentance” (Luke 3:8) and the people responded with “what shall we do?” (Luke 3:10). The answer would involve that dreaded thing called “works” – reread Ephesians 2:8-10. It is time for us to repent and begin to do what God instructed Israel to do.

For a deeper look at Israel and how you fit in, read my articles on The Two Houses of Israel.

And for those in the United States of America, have a happy 4th of July!