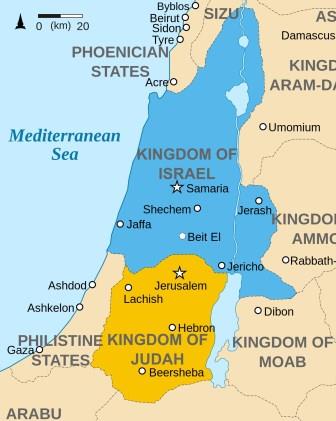 Ancient Israel was at its peak during the reigns of King David and King Solomon. Solomon was blessed with divine wisdom from God, constructed a magnificent Temple, and expanded Israel’s influence worldwide. But Solomon married many foreign wives and was drawn into their pagan religions. Because of this, God decreed that the united kingdom of Israel would be divided, and He promised to give Solomon’s servant Jeroboam the ten northern tribes. Only Judah would remain with Solomon’s son Rehoboam.

Then Ahijah took hold of the new cloak which was on him and tore it into twelve pieces. He said to Jeroboam, “Take for yourself ten pieces; for thus says the LORD, the God of Israel, ‘Behold, I will tear the kingdom out of the hand of Solomon and give you ten tribes (but he will have one tribe, for the sake of My servant David and for the sake of Jerusalem, the city which I have chosen from all the tribes of Israel), because they have forsaken Me, and have worshiped Ashtoreth the goddess of the Sidonians, Chemosh the god of Moab, and Milcom the god of the sons of Ammon; and they have not walked in My ways, doing what is right in My sight and observing My statutes and My ordinances, as his father David did (1 Kings 11:30-33).

Jeroboam said in his heart, “Now the kingdom will return to the house of David. If this people go up to offer sacrifices in the house of the LORD at Jerusalem, then the heart of this people will return to their lord, even to Rehoboam king of Judah; and they will kill me and return to Rehoboam king of Judah.” So the king consulted, and made two golden calves, and he said to them, “It is too much for you to go up to Jerusalem; behold your gods, O Israel, that brought you up from the land of Egypt.” He set one in Bethel, and the other he put in Dan. Now this thing became a sin, for the people went to worship before the one as far as Dan. And he made houses on high places, and made priests from among all the people who were not of the sons of Levi. Jeroboam instituted a feast in the eighth month on the fifteenth day of the month, like the feast which is in Judah, and he went up to the altar; thus he did in Bethel, sacrificing to the calves which he had made. And he stationed in Bethel the priests of the high places which he had made. Then he went up to the altar which he had made in Bethel on the fifteenth day in the eighth month, even in the month which he had devised in his own heart; and he instituted a feast for the sons of Israel and went up to the altar to burn incense (1 Kings 12:26-33).

The Captivity and Dispersion

Jerusalem was attacked by the Babylonians and the southern kingdom of Judah taken captive in 586BC. They returned after 70 years of captivity, but during that time period God gave Daniel a prophecy detailing two events: the coming of the promised Messiah, and their end as a nation. Both were fulfilled just as God had spoken. Yeshua (Jesus) the Messiah came and was crucified, buried and resurrected just outside the city. And in AD70, Jerusalem was sacked by the Romans. By AD135, the southern kingdom of Judah and the nation of Israel ceased to exist.

The word of the LORD came again to me saying, “And you, son of man, take for yourself one stick and write on it, ‘For Judah and for the sons of Israel, his companions’; then take another stick and write on it, ‘For Joseph, the stick of Ephraim and all the house of Israel, his companions.’ “Then join them for yourself one to another into one stick, that they may become one in your hand.

Earlier in this chapter (Ezekiel 37:1-14) Ezekiel prophesied that Israel, the nation that would cease to exist, the company of people that would become nothing more than a pile of dead, dry bones, would once again live and would once again have the Spirit of the LORD. Here in this passage, Ezekiel prophesied that the two houses of Israel would be brought back together under one king. 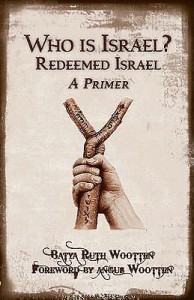 This prophecy of the literal, physical reunification of Israel remains unfulfilled. Either at or just prior to the return of Messiah Yeshua, the scattered houses of Judah and Israel/Ephraim will be reunited under one king. Ezekiel called him “David” (Ezekiel 37:24), though King David has long been dead – he was even dead when Ezekiel prophesied. This prophecy uses the reference to King David to describe the son of David, the King of Kings, Yeshua the Messiah.

The restoration of the Whole House of Israel is essential to the Gospel message, and it affects you regardless of your ethnic heritage.

You can continue reading more about the Two Houses of Israel here.