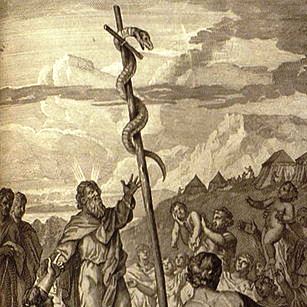 A Maskil of Asaph.
Listen, O my people, to my instruction;
Incline your ears to the words of my mouth.
I will open my mouth in a parable;
I will utter dark sayings of old,
Which we have heard and known,
And our fathers have told us.
(Psalm 78:1-3)

Asaph was one of David’s three Chief Musicians, possibly the highest ranking one in charge of the order of worship at the tent where the Ark of the Covenant was housed. His sons carried on the tradition of his service in the following generations.  All three musicians and their sons were present at the dedication of the Temple under Solomon (2 Chronicles 5:12).  Asaph is listed as the author of a dozen of the Psalms, though Psalm 78 may have actually been composed by his descendants.  A few of the lines hint that it might have been written after the kingdom was divided.

This is a maskil (Strong’s #H4905), an instructive or didactic poem. It is somewhat lengthy compared to other Psalms, and in it the author recounts several of the events of Israel’s history. But they are more than just historical events. The Psalmist calls this a parable or an allegory. These were things that actually happened, and yet they have some deeper meaning or application to the hearer. Matthew quoted this Psalm from the Septuagint when he spoke of Yeshua’s use of parables, “I will open my mouth in parables: I will utter things hidden since the foundation of the world” (Matthew 13:35).

We will not conceal them from their children,
But tell to the generation to come the praises of the LORD,
And His strength and His wondrous works that He has done.
(Psalm 78:4)

We are often told that we should learn from history; that we need not repeat past mistakes. The writer tells of the “wondrous works” of the LORD, and along with them tells of the disastrous works of the people. The accounts are not concealed or sugar-coated. Past successes and failures served as instruction to future generations passed on from fathers to children to grandchildren, “even the children yet to be born” (verse 6).

Unfortunately most of the rest of the Psalm shows the dismal failure of a “stubborn and rebellious generation, a generation that did not prepare its heart and whose spirit was not faithful to God” (verse 8). The story escalates. Yahweh does great wonders, and “they forgot” (verse 11). He led them and provided for them, and “they still continued to sin against Him” (verse 17). They tested Him and spoke out against Him, until “His anger also mounted against Israel, because they did not believe in God and did not trust in His salvation. Yet He commanded the clouds above and opened the doors of heaven; He rained down manna upon them to eat and gave them food from heaven” (verses 21-24).

In perfect hindsight we wonder how our forefathers could be so dense – surely we would have acted differently. Then we come to this:

When He killed them, then they sought Him,
And returned and searched diligently for God;
And they remembered that God was their rock,
And the Most High God their Redeemer.
(Psalm 78:34-35)

When God began to kill off the rebellious people, then they turned to him in repentance. Our Torah reading this week, Chukat, tells us this story.

The LORD sent fiery serpents among the people and they bit the people, so that many people of Israel died. So the people came to Moses and said, “We have sinned, because we have spoken against the LORD and you; intercede with the LORD, that He may remove the serpents from us.” And Moses interceded for the people. Then the LORD said to Moses, “Make a fiery serpent, and set it on a standard; and it shall come about, that everyone who is bitten, when he looks at it, he will live.” And Moses made a bronze serpent and set it on the standard; and it came about, that if a serpent bit any man, when he looked to the bronze serpent, he lived.
(Numbers 21:6-9)

This seems to be such a drastic measure. God had to kill some of them to get their attention, and only in the face of death did they seek Him. Yet we are not that different. We are dead, condemned by sin and separated from our Father. Our only hope of salvation is to look to Yeshua, our rock, the Most High God, our Redeemer. He spoke of himself, using this story in Numbers as a parable, saying, “As Moses lifted up the serpent in the wilderness, even so must the Son of Man be lifted up; so that whoever believes will in Him have eternal life” (John 3:14-15).

After verse 35 of Psalm 78 there is a note in the Masoretic texts that simply says chatsi hassepher, “the middle of the book.” According to the numbering in these ancient texts, at this point the reader has reached the middle of the book of Psalms. It is a milestone; a time to pause, reflect, renew your resolve, and then to continue on. Ahead are some of the most beautiful Psalms of praise, culminating in shouts of Halleluyah!

In our Torah readings the children of Israel continue on under the protection of the Father to possess the Promised Land. There will be more disobedience resulting in God’s judgement, including death. There will be more battles to fight with Yahweh giving them victory. Moses will die.

In fact, when we conclude the Torah reading cycle at Sukkot, the Feast of Tabernacles, Israel has still not yet crossed the Jordan. Torah does not take them into the Promised Land. Joshua – Yehoshua – will lead them in.

And as we continue on reading the words of Yeshua as recorded in the Gospel of John, we come to one of the most loved and well-known passages in all of Scripture:

For God so loved the world, that He gave His only begotten Son, that whoever believes in Him shall not perish, but have eternal life.
(John 3:16)

May we look to Yeshua in true repentance and find life.  Only he will lead us in.

Yeshua said to him, “I am the way, the truth, and the life! No one comes to the Father except through Me.
(John 14:6 TLV)