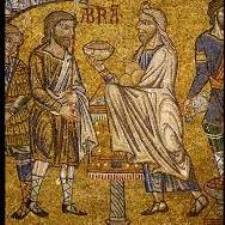 In Genesis chapter 14 we are introduced to a man who will make just one brief appearance on the Biblical scene, but who’s legacy will be heralded down through history. We don’t even know his real name or much of anything about him, which of course is part of the mystery.

And Melchizedek king of Salem brought out bread and wine; now he was a priest of God Most High. He blessed him and said,
“Blessed be Abram of God Most High,
Possessor of heaven and earth;
And blessed be God Most High,
Who has delivered your enemies into your hand.”
He gave him a tenth of all.
(Genesis 14:18-20)

Abram (not yet called “Abraham”) has just returned from a battle. Four “kings” were aligned against five other “kings” who evidently did not want to submit to the leader of the group. These “kings” were regional leaders of cities or city-states, and in their little spat the winner of the fight had carried off Abram’s nephew Lot and his possessions. Abram went over with a few hundred of his own men, whopped them, and brought back Lot and all the stuff.

The king of Sodom, the city where Lot lived, came out to thank Abram. Then in the passage quoted above, Melchizedek appears out of nowhere with bread and wine and pronounces a blessing. It seems like an odd insertion into the story. The next line picks up with conversation between Abram and the king of Sodom, and Melchizedek isn’t mentioned again.

We don’t know his given name. Melchizedek is either a title or a name taken after he assumed his position as king of Salem. This compound name, מלכי־צדק malkiy-tsedeq, is a combination of the Hebrew words melek (Strong’s Hebrew word #H4427 “king”) and tzedek (#H6664 “righteousness”). Contrary to popular thought, a direct translation of this name likely is not “king of righteousness.”

The word pair or noun construct form of the word melek does not change vowels (First Hebrew Primer, p.72; Basics of Biblical Hebrew, p.102). King of righteous would simply be melek-tsedeq. According to Brown-Driver-Briggs, malkiy-tsedeq means “my king is Sedek.” The form of melek in the first part of this name, malkiy, means “my king.” (Some linguists suggest that malkiy- may have at one time been the ancient noun construct form.) The Greek Septuagint simply transliterates the Hebrew name with Greek characters as does the Greek New Testament, so that isn’t much help.

The confusion may arise from this passage in the book of Hebrews in the New Testament: “first being by interpretation King of righteousness” (Hebrews 7:2 KJV). While the writer of Hebrews is trying to make a point about Yeshua, this probably isn’t exactly correct.

Salem is generally considered to be the city-state that will later be known as Jerusalem. This name only appears here and in Psalm 76:2, where it says of God, “his tabernacle is in Salem.” The Hebrew pronunciation is shalem, from the same root as shalom.

He is also identified as cohen l’el elyon “priest to God most high.” This phrase is unique to this passage and never describes anyone else. How did he obtain this position? We are not told.

Here are three theories about who this mysterious king and priest is.

The most common understanding among Jewish teachers is that Melchizedek is Noah’s son, Shem. This note is from the Stone Edition Chumash at Genesis 14:18.

After meeting Abraham at the Valley of Shaveh, the king of Sodom escorted him to the city of Salem [=Jerusalem] where they were met by King Malchizedek, whom the Sages identify as Shem, son of Noah. He is called a priest of God, the Most High, because unlike other priests of the other nations who served angels, Malchizedek served Hashem (Ramban).

Although Abram is the tenth generation from Noah, the ages listed in the genealogy of Genesis 11 allow for the idea that Abram’s great-great-great-great-great-great-great grandfather was still alive. This is based on the Masoretic text used by the Jewish community and in most all of our English translations. The Greek Septuagint, however, reads differently regarding the ages and would have Shem dead several hundred years before Abram’s birth.

The book of Jashar, the authenticity of which is highly suspect, affirms this identity although it calls him “Lord” rather than “King” – Adonizedek. It may be that the late writing we now call Jashar was composed to support Jewish legend and that this particular section was intended to give credence to the Masoretic version.

And Adonizedek king of Jerusalem, the same was Shem, went out with his men to meet Abram and his people, with bread and wine, and they remained together in the valley of Melech (Jashar 16:11).

It is interesting to note that some five hundred or so years later at the conquest of the Promised Land, the king of Jerusalem is identified by the title Adoni-tzedek (Joshua 10:1).

Some Christians hold that Melchizedek is a Christophany, an appearance of Jesus Christ in the Old Testament before his incarnation. This view was more popular in times past than today. The idea is derived from Hebrews 7:1-4 and in particular, verse 3.

Without father, without mother, without genealogy, having neither beginning of days nor end of life, but made like the Son of God, he remains a priest perpetually (Hebrews 7:3).

Yeshua’s discourse in John is used as Scriptural support.

It is witnessed of Melchizedek that he liveth, and that he abideth a priest continually (v. 3,8); nay (v. 13-14), the apostle makes him of whom these things are spoken to be our Lord who sprang out of Judah. It is likewise difficult to think that any mere man should, at this time, be greater than Abram in the things of God, that Christ should be a priest after the order of any mere man, and that any human priesthood should so far excel that of Aaron as it is certain that Melchizedek’s did.

Early gnostic sects evidently believed this. In the Nag Hammadi library there is a tractate titled Melchizedek (Meyer, The Nag Hammadi Scriptures, pp. 599-605) that appears to express this belief. The commentary notes tell me this is what it says, but personally I found the English translation with all the broken sentences and missing parts to be very difficult.

Herbert W Armstrong wrote that “Melchizedek and Christ are one in the same person” (The Mystery of Melchizedek Solved!, 1972). This has led to some of the non-Jewish Messianic groups, influenced by splinter groups from the Worldwide Church of God, to perpetuate this idea.

The NET Bible has the following at Genesis 14:18.

Though some have identified him with the preincarnate Christ or with Noah’s son Shem, it is far more likely that Melchizedek was a Canaanite royal priest whom God used to renew the promise of the blessing to Abram, perhaps because Abram considered Melchizedek his spiritual superior. But Melchizedek remains an enigma… It is his royal priestly status that makes Melchizedek a type of Christ: He was identified with Jerusalem, superior to the ancestor of Israel, and both a king and a priest. Unlike the normal Canaanites, this man served “God Most High” (אֵ֥ל עֶלְיֹֽון ‘el ‘elyon) – one sovereign God, who was the creator of all the universe.

This seems to be aligned with most modern commentaries and is probably the prevailing thought today, though it is not new. Dr. John Gill’s Exposition of the Bible, written in the mid 18th century, reads:

…he seems to be what Josephus says he was, a Canaanitish prince, a pious and religious man, eminently raised up by God, and whose genealogy was kept a secret, that he might be in this as in other things a type of Christ…

The reference to Josephus is from Wars of the Jews, Book 6, Chapter 10:

But he who first built it was a potent man among the Canaanites, and is in our own tongue called [Melchisedek], the Righteous King, for such he really was; on which account he was [there] the first priest of God, and first built a temple [there], and called the city Jerusalem, which was formerly called Salem.

The reference in Hebrews to “Without father, without mother, without genealogy, having neither beginning of days nor end of life” is simply saying that the Biblical record, Genesis, written by Moses, does not tell us who his parents were, when he was born or when he died.

A Whirlwind Of Doctrine

The LORD has sworn and will not change His mind,
“You are a priest forever
According to the order of Melchizedek.”
(Psalms 110:4)

This portion of Psalm 110 and its quotation in Hebrews 5 and especially Hebrews 7 has led to an assortment teachings that could hardly have been imagined by either the Psalmist (identified as David) or the unknown author of Hebrews.

According to Brown Driver Briggs, the Hebrew word translated as “order,” דּברה dibrah (Strong’s #H1700) means “cause, manner, reason.” From this, various groups such as the Church of Jesus Christ of Latter-day Saints have created a “Priesthood of Melchizedek,” a phrase which never appears in Scripture. For an incredible exploitation of this concept, just look up the Mormon holy book Doctrines and Covenants, chapter 107.

“According to the order of” or “in the manner of” Melchizedek in Psalm 110 would seem to indicate that David (and his descendants) would act in the capacity of both king and priest. Consider this note from the NIV Study Bible at Psalm 110:4.

Clearly these examples illustrate that a priest “according to the order of Melchizedek” – a king-priest – exercises authority over but does not do away with the Levitical/Aaronic priesthood. Isaiah clearly states that priests and Levites will perform their duties during the millennial reign of Messiah, taken from those scattered to the nations in the diaspora.

“Then they shall bring all your brethren from all the nations as a grain offering to the LORD, on horses, in chariots, in litters, on mules and on camels, to My holy mountain Jerusalem,” says the LORD, “just as the sons of Israel bring their grain offering in a clean vessel to the house of the LORD. “I will also take some of them for priests and for Levites,” says the LORD (Isaiah 66:20-21).

Melchizedek teaches how this comes together, whether he was a type of the coming Messiah or a manifestation of Yeshua himself.

The Cultural Backgrounds Study Bible provides some insight into the origin of some of these ideas.

Once we get to the intertestamental period, Melchizedek becomes a much more intriguing figure. The Hasmoneans, seeking to establish a Messianic dimension to their rule in the second century BC, justified their priestly-royal prerogatives by references to Melchizedek. This practice was continued by the Sadducees. In the Dead Sea Scrolls Melchizedek has become the subject of much speculative interpretation. He is depicted as a heavenly redeemer figure, a leader of the forces of light, who brings release to the captives and reigns during the Messianic age. He is the heavenly high priest to whom archangels make expiation for the sins of ignorance of the righteous. When we get to Hebrews 7, all of this Jewish tradition is mixed into consideration of Melchizedek.

So who was this man? He was Melchizedek, king of Salem, priest of God Most High. From the historical account in the Torah, that is really all we know for certain.

2 thoughts on “Who Was Melchizedek?”