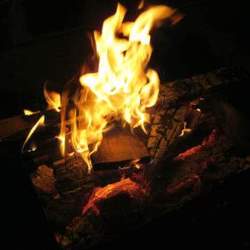 At the beginning of Exodus 35 we are reminded again that we are to observe the Sabbath day. This time the instruction includes a very specific admonition:

You shall not kindle a fire in any of your dwellings on the sabbath day.
(Exodus 35:3)

This is the only place in Scripture that this specific command can be found. No reason is given (as is often the case) though one might presume that “back in those days” kindling a fire was quite a bit of work. In fact, it is one of the thirty-nine melachot, the creative work activities prohibited on Shabbat according to Rabbinic Judaism.

Traditionally the Sabbath candles are lit by the woman of the household eighteen minutes before sundown on Friday evening. After moving her hands over the flame and then drawing them to her face, she recites a blessing welcoming the Sabbath. It is the last flame kindled during the week, the last bit of work done before the anticipated day of rest begins. If one is running late or forgets to do it, Rabbinic law considers lighting the candles after sunset to be desecration of the Sabbath.

A few years back I acquired a three-volume set – over 2200 pages total – titled Shemirath Shabbath, A Guide to the Practical Observance of Shabbath (the word in the title comes from the Hebrew verb shamar, meaning to guard or protect). I’m not sure how practical it is, but it certainly is very detailed. A list of what constitutes the forbidden act of kindling a fire is found in volume 1:

13:1a
On Shabbat, it is forbidden to light or extinguish a fire, by any means whatsoever.
The prohibition also extends to:
Switching electricity on or off,
Burning with a magnifying glass,
Igniting with a flame taken from a fire which is already burning, and
Raising or lowering a flame.
If a fire has been lit on Shabbat in breach of this prohibition, one may not derive any benefit from it on Shabbath.

I’m not advocating following all of these rules that aren’t actually found in Torah. If you choose to do so and you can still delight in the Sabbath (Isaiah 58:13-14), I pray you are blessed. Some of them seem rather burdensome to me, which is certainly not the intent of the Torah instruction and something Yeshua taught against.

The Most Destructive Fire

So also the tongue is a small part of the body, and yet it boasts of great things. See how great a forest is set aflame by such a small fire! And the tongue is a fire, the very world of iniquity; the tongue is set among our members as that which defiles the entire body, and sets on fire the course of our life, and is set on fire by hell.
(James 3:5-6)

A worthless man digs up evil,
While his words are like scorching fire.
(Proverbs 16:27)

For lack of wood the fire goes out,
And where there is no whisperer, contention quiets down.
Like charcoal to hot embers and wood to fire,
So is a contentious man to kindle strife.
(Proverbs 26:20-21)

Fiery conversations and tense situations are just a part of life. When Yeshua drove merchants and money changers out of the temple with a whip, I doubt that he very sweetly and calmly said, “Take these things away; stop making My Father’s house a place of business” (John 2:16). We all have disagreements and face controversies, and sometimes those can escalate. We also understand from Scripture that there are times for us to “be angry, and yet do not sin” (Ephesians 4:26).

Lately I’ve been singing a part of the Sabbath liturgy from a Reformed Jewish congregation I sometimes stream online. The verses surround the Amidah, a traditional prayer consisting (originally) of eighteen blessings. But oddly enough this is sung in the opposite order as they appear in the prayer. The first verse, from Psalm 19, is actually the conclusion after the final blessing. The second verse is from the Mourner’s Kaddish, and the final verse is from Psalm 51, the opening of the Amidah prayer.

They speak of peace, not a destructive fire, beginning and ending with the words we speak. I encourage you to read through it and make it your prayer – especially on the Sabbath day.

May the words of my mouth
And the meditations of my heart
Be acceptable to you
Adonai, my rock and my redeemer

May the One who makes peace in the high heavens
Make peace for us, and all Israel,
And all who inhabit the earth

Adonai, open up my lips
That my mouth may declare your praise

1 thought on “You Shall Not Kindle A Fire”