Perhaps no other Biblical woman invokes so vivid an image of evil, deception, idolatry and murder. Is Hillary Clinton the modern day antitype of this ancient Queen?

I’ve read several assertions by various authors about events of our modern world, particularly in the United States, and how they are prophesied or relate to something in the Holy Scriptures. Frankly, I view most of them with much skepticism. I expressed this in my post The United States in Prophecy. So when I picked up The Paradigm by Jonathan Cahn I didn’t even think I would actually finish it. Years ago I read his first book, The Harbinger. While initially it was fascinating, I started to question whether the association of events surrounding 9/11 really had any relationship to one short passage about ancient Israel found in Isaiah. I still think much of that is a stretch. Later I started reading The Mystery of the Shemitah but never finished it. But this book is different. 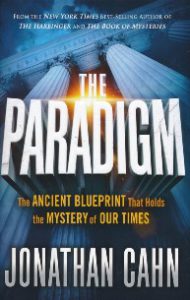 Title: The Paradigm
The Ancient Blueprint That Holds the Mystery of Our Times

The New Oxford American Dictionary defines paradigm as “a typical example or pattern of something; a model.” Rabbi Jonathan Cahn defines a paradigm as “a pattern, a model, a template, a prototype, and exemplar, an archetype.” Cahn believes paradigms exist throughout the Bible.

The author doesn’t predict the future. He describes a Biblical historical account, which he calls a paradigm or pattern. In this case, he starts with a setting in Israel, the northern kingdom following the split with the southern kingdom of Judah. In a time frame spanning the prophetic ministries of Elijah and Elisha, the first key players are King Ahab and Queen Jezebel.

Cahn draws some striking parallels between these ancient rulers and the modern-day administration of Bill and Hillary Clinton. This isn’t just an incident or two – he does this over and over without distorting either the Biblical account or recent events. Throughout the entire paradigm is the practice of Baal worship and one of its main tenets, child sacrifice. Cahn sees a direct correlation between Queen Jezebel’s support for the prophets of Baal and Hillary Clinton’s advocacy for abortion on demand. There are several other parallels with the Clinton years, including the Whitewater land deal, the death of Vince Foster, and the Monica Lewinski scandal.

The author shows many aspects of the paradigm including the timing of certain events. He shows how things like Bill Clinton’s apparent repentance at the National Prayer Breakfast or the terrorist attacks on September 11 all fit the timeline of the ancient paradigm – again, as confirmation of the paradigm and not as a way to predict future events. Cahn shows how Bin Laden is the modern day antitype of the ancient Ben-Hadad of Aram/Damascus, the nemesis of King Ahab. Even Barack Obama has a Biblical counterpart in this paradigm.

Of all the stories in the time of Elijah and Elisha, I personally have found the account of Jehu most interesting (read my post Jehu’s Revival). Elijah flees from Ahab and Jezebel to hide in a cave on Mount Horeb, the Mountain of God. There he is told, among other things, to anoint Jehu king over Israel (1 Kings 19:16). It is actually “one of the sons of the prophets” with Elisha who carries this out (2 Kings 9:1-6). Jehu had once been associated with Ahab and Jezebel, but now that king Ahab was out of the picture, he was determined to take down the queen and become the king. According to Cahn, Jehu’s modern antitype in this paradigm is Donald Trump, who took down Hillary Clinton and became the President of the United States.

Trump’s promise was to “drain the swamp.” King Jehu set out to eradicate Baal worship from Israel. But along the way, he picked up Jehonadab in his chariot. Jehonadab was a Rechabite (2 Kings 10:15) and a righteous man (Jeremiah 35:1-19). The dominating, unpredictable and sometimes crude Donald Trump stopped along the way and picked up a level-headed righteous man to accompany him on his mission – Mike Pence. The author believes this is all part of the paradigm.

There is much more, including superficial revival in the land. How does it end? Remember, prediction is not part of the paradigm. As I write this, it is “Super Tuesday” in the United States. Clearly, the political future in America is unknown territory. What we can know, and what the paradigm reinforces, is that God is in control.

Jonathan Cahn writes in a way that keeps your interest, even if you can see pretty much where he is headed with the story. I did find this book to be somewhat repetitious – not from chapter to chapter, but right there on the same page, sometimes in the same paragraph. It could probably have been written with half the words, but then again the repetition reinforces the point of the book. He doesn’t use the distraction of a fictional character as he did in The Harbinger. I haven’t yet read The Oracle, but I understand he uses a fictional character there as well. The style of The Paradigm is, in my opinion, more credible.

Cahn does a good job of focusing on events rather than personalities. Obviously he names names and leaves no doubt about who are the modern characters in the ancient paradigm. But who they are isn’t as important as what they do. If it was written without names, you could probably figure out the players, but that would be awkward. The Paradigm states things the way they were – and are.

Other books by Jonathan Cahn:

The Oracle (2019)
The Jubilean Mysteries Unveiled