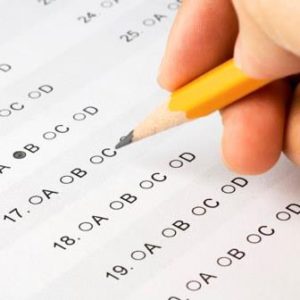 Throughout my life I have taken quite a few tests. I’m referring to written exams, times when someone was attempting to determine just how much I knew about a certain subject. It is likely you’ve experienced this as well. Early on, most of them were in school, and some for personal accomplishments like my amateur radio license or driver’s license. Later I took a lot of tests for professional training and certification.

The overwhelming majority of these, particularly in later years, have been objective with multiple choice answers. Maybe that is because tests today tend to be scored by machines rather than by humans. By definition, objective tests have an answer that is either right or wrong, and not subject the interpretation like an essay answer would be. And because of that, the test taker can develop a skill in arriving at answers even if they aren’t immediately known.

You’ve seen an example of that skill if you’ve ever watched a television program like “Who Wants To Be A Millionaire.” If the contestant is sure of the answer, they just give it. However if they are not, they may employ another method of arriving at the answer called “lifelines” – 50:50, Ask the Audience, or Phone a Friend.

So in taking a multiple-choice test, I’ve learned how to do it so that I can achieve the highest score. First, I go through the entire test answering the questions I am certain I know. Then I make a second pass, answering the ones I think I might know. Finally, I go back to the ones I didn’t know and rule out any answers I know are not correct. Sometimes, I just have to guess between the answers that are left. I’ve been pretty successful with this method.

Something significant happens between the first and second pass. Sometimes the answer to one of the questions I didn’t know, or at least a clue to the answer, can be found in another question or answer. But that only happens by reading the entire exam. It even works with subjective tests where you are required to write out an answer – the vocabulary and phrasing, and sometimes the answer itself, can often be found in other places within the test.

Recently I was presented with a test, one I had seen before, about Bible passages. The “test” came from Chick Publications, which should be a huge red flag for anyone familiar with that organization. The fill-in-the-blank test came with these instructions:

Using the New International Version Bible, answer the following questions to this NIV quiz. Do not rely on your memory. As the Bible is the final authority, you must take the answer from the Bible verse (not from footnotes but from the text).

The test then referred to several New Testament passages that are not found in the text of the NIV, or for that matter, in most contemporary Bible translations. The result, of course, is complete failure – because you are not using the King James Version.

The instructions, as well as the test itself, are nonsense. It has often been said that the best interpreter of Scripture is Scripture itself. For the answer to things we cannot understand in one passage, sometimes we just need to look to other passages. Only the adversary would want you to limit your study to one verse, one portion of Scripture, or even one translation of Scripture.

But what about these verses that are “missing” from so many translations?

Chapter and verse numbering makes it easier to find a particular passage, but they did not exist in the original texts. New Testament divisions as we know it were first added to the Greek text used to produce the Geneva Bible and later the King James Version. It stands to reason, then, that another different Greek text (and there are several) might not match up exactly.

In an over-simplified explanation, the King James Version is translated from the Byzantine family of Greek texts. Most of the newer versions are translated primarily from the Alexandrian family of Greek texts which, although discovered more recently, are actually older and probably more accurately reflect the first century writings. They have differences, and the verse numbering we commonly use was done in the Byzantine texts, which occasionally has words that do not appear in the Alexandrian texts. Based on this, some will errantly say that newer translations like the New International Version “omit” certain verses. But, it could also be said that the other translations, like the King James Version, “add” certain verses.

Really, they are just different. There is no conspiracy or covert attempt to change the Bible.

Remember that these source texts were not produced on a printing press. They were hand-written, incomplete, and likely contained cross-references and other notes. Some of those cross-references and notes appear to have made it into the Bible text of the Byzantine family. When older Alexandrian texts are compared, they simply are not there.

Consider Matthew 18:11 in the King James Version, For the Son of man is come to save that which was lost. This verse isn’t in the New International Version, translated from the Alexandrian text. The NIV goes from Matthew 18:10 to Matthew 18:12. It really isn’t the verse that is “missing,” it is just the verse reference. In the footnotes (which you are not allowed to use in the Chick test) you will find the entire verse printed, along with a note saying this verse is found in some manuscripts. In the New American Standard Bible, my preferred translation, verse 11 is in the text but placed in brackets. A footnote clarifies that early manuscripts do not contain this verse.

It should be noted that the same words “missing” from Matthew 18:11 appear in Luke 19:10 in all of these translations, which is probably where the KJV source text got it in the first place. If this was a conspiracy, it failed miserably.

Consider another example from Paul’s writings. First, from the King James Version:

In whom we have redemption through his blood, the forgiveness of sins, according to the riches of his grace… (Ephesians 1:7 KJV).

In whom we have redemption through his blood, even the forgiveness of sins… (Colossians 1:14 KJV).

Now, look at the same verses in the New American Standard Bible, taken from the older Alexandrian family of Greek texts:

In Him we have redemption through His blood, the forgiveness of our trespasses, according to the riches of His grace… (Ephesians 1:7 NASB)

In whom we have redemption, the forgiveness of sins (Colossians 1:14 NASB).

Do you see the difference in the Colossians passage? If the conspiracy was to remove references to the blood of Yeshua in the newer translations, as King James Only advocates claim, again they have failed miserably by forgetting to delete the phrase in Ephesians. The more reasonable explanation is that the phrase “through his blood” was added to the Colossians verse in the Byzantine text. How did that happen? In the hand-written ancient copy, someone realized that a similar passage in Ephesians had these additional words and made a note of it in the text. Someone else, not knowing it was an added note, incorporated it into the Bible text.

Now For Something Completely Different

What about when two translations of the same verse say different things? Take, for example, a passage that is frequently quoted among Messianic and Hebrew Roots people:

Blessed are they that do his commandments, that they may have right to the tree of life, and may enter in through the gates into the city (Revelation 22:14 KJV).

Blessed are those who wash their robes, so that they may have the right to the tree of life, and may enter by the gates into the city (Revelation 22:14 NASB).

Which is the correct translation – “Blessed are they that do his commands” or “Blessed are those who wash their robes?” Actually, both are correct. They both represent accurate translations of the source texts, which are different.

What did John actually write? We do not know, because we do not have John’s original manuscript. We only have copies from centuries later, and remember, these were all hand copied. Even though these two phrases are very different in appearance in English, they look very similar in Greek. I don’t read Greek, but here is what they look like:

Most Bible critics acknowledge that the difference is likely a scribal error in copying.

Many in our persuasion would like for it to read “do his commands,” because that is the doctrinal teaching we most like to expound. But wait a minute, is what we like how we determine what is correct? The oldest extant copies of Revelation actually read “wash their robes.” But again, both of these English translations are each accurate renderings of their source, whether it be from the Byzantine or Alexandrian texts.

The Complete Jewish Bible and the Tree of Life Version both render this passage “wash their robes,” with the TLV adding a footnote that some manuscripts read “do his commands.” The Scriptures (ISR), a biased pick-and-choose version that openly acknowledges they don’t use any particular Greek text, says “do his commands.”

Let’s test, and in the process grow our Biblical understanding using multiple reference sources, not (as Chick suggests) by ignoring footnotes or other passages. Even the best English translation is still a translation from one language to another and will be subject to the translator’s bias and interpretation. It is best to use a Bible translation that is the combined effort of a team of translators rather than one individual.

When we study, we should have one main translation while using several different versions for comparison. I prefer to use a translation that is more literal (word for word) rather than dynamic (thought for thought), but I also gain a lot of insight from dynamic equivalent translations and paraphrases. For Alexandrian-based translations, I recommend the New American Standard Bible or the English Standard Version. Both of these will also include variants in brackets or footnotes when there are differences in the source texts. Similarly, if you prefer the Byzantine family, I recommend the New King James Version. It will likewise have footnotes when the Alexandrian texts are different. And for those who prefer the language of a Messianic Bible translation, I highly recommend the Tree of Life Version.