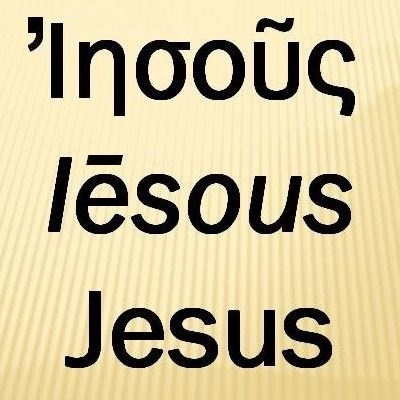 Most Bible readers know that the mother of our Messiah did not call him by the name “Jesus.” She almost certainly spoke Aramaic, the language of the Jewish people at that time, closely related to ancient Hebrew. She would have given him the name “Yeshua,” a somewhat common though very meaningful name. It was fore-ordained, spoken by the angel Gabriel before his birth (Luke 1:31).

Nearly all our English Bibles (and those in most Latin-based languages) render the Messiah’s name as Jesus. And like many in the Messianic and Hebrew Roots community, I have trained myself so that when I see “Jesus” in the text, I say “Yeshua.” Several of the Bibles that we use – like the Complete Jewish Bible or the Tree of Life Version – have already made this “correction” for us. But is that really correct?

Brace yourself! “Jesus” as an accurate rendering for our English versions of the New Testament, and perhaps more so than “Yeshua.” Don’t tune me out just yet. I did NOT say that his name is Jesus – his name is, in fact, Yeshua. But there is more to consider when evaluating Bible versions. Sometimes words are translated, using an equivalent word in English to represent a word in the original languages. Sometimes words are transliterated, meaning English spelling is used to closely simulate the original pronunciation.

A Confusion of Languages

Our English New Testament is translated primarily from Greek texts, so let’s look at the Greek word translated as Jesus:

According to the New American Standard Exhaustive Concordance (NASEC) (Lockman), this name occurs 914 times in the New Testament. It originates from the Hebrew name יהושׁוּע Yehoshua (Strong’s reference number H3091). In English, Yehoshua is transliterated/translated as Joshua. The NASEC says that Yehoshua is comprised of the proper name of God (H3068) and the Hebrew word meaning to deliver (H3467). Yehoshua means Yahweh delivers, or as we more commonly say, Yahweh saves.

In the Septuagint, the ancient Greek translation of the Hebrew scriptures by Hebrew scribes, the name Yehoshua is transliterated/translated as Iesous. In fact, the sixth book of the Bible, Joshua, is Iesous in the Septuagint. So, it is the path of the languages that brings us to the transliterated name Jesus. Going directly from Hebrew to English, we would say Joshua. But going from Hebrew to Greek and then to English, we say Jesus.

In the New Testament, Joshua the successor to Moses is mentioned twice – once in Acts 7:45 and once in Hebrews 4:8. Another Joshua is found among the genealogy of the Messiah in Luke 3:29. In all three instances, the Greek name used is Iesous.2 All other uses of the name Iesous in the New Testament are referring to the Messiah. In the New American Standard Bible (NASB) and nearly all other translations Iesous is rendered as Joshua in the three instances I just mentioned. Technically that is inconsistent, though the NASB does have a footnote at each of these verses that says, “Gr. Jesus” indicating that the text has the same Greek word that is translated as Jesus.

The KJV reads “Jose” in Luke 3:293 and Jesus in all other passages. That is more consistent (except in Luke) yet more confusing for the reader.

To further reduce confusion, all modern English translations use Hebrew-based names for the more confusing Greek names of Old Testament persons, for example Isaiah instead of Esaias and Jonah rather than Jonas. Jesus, who is not mentioned by name in any Old Testament passage, is transliterated rather than translated which creates a distinct identity throughout the New Testament. Notably, the same thing could have been accomplished by translating his name as Yeshua.

The beginning of the gospel of Jesus Christ, the Son of God.
Mark 1:1 NASB

This verse reads pretty much the same in just about all English Bible versions. Some might say “good news” instead of gospel, and a few say “the Messiah” instead of Christ, but that’s about it. There was a time, though, when it didn’t sound quite like this. Here it is from the original King James Version of 1611 (the one we use now is from 1769):

The beginning of the Gospel of Iesus Christ, the Sonne of God…
Mark 1:1 KJV-1611

Aside from the unusual spelling (there were no standard English spellings) of “sonne,” you will notice that the only difference is the name of the Messiah, Iesus Christ. It was pronounced like the transliterated Greek name I mentioned earlier, with the “i” more like a “y” sound – not exactly, but there isn’t an exact equivalent letter sound in modern English. What isn’t present is the “j” or soft “g” sound. All kind of nonsense has been written about “J” in Hebrew Roots circles. I’m not getting into silly stories; you can read about the development of this letter in Latin-based languages on Wikipedia.

What I want you to see is that this English translation is really a transliteration of what is written in the Greek source texts. And of course, this did not originate with the King James Version.

The beginning of the Gospel of Iesus Christ, the Sonne of God:
Geneva Bible, 1560 revised in 1587

The begynnyng of the Gospel of Iesu Christ, the sonne of God.
Bishop’s Bible, 1568

The begynning of the gospell of Iesu Christ, þe sonne of God,
Matthew’s Bible by John Rodgers, 1549

This is the begynnynge of the gospell of Iesus Christ the sonne of God,
Coverdale, 1535

The beginnynge of the Gospell of Iesu Christ the sonne of God
Tyndale, 1526

(These examples are from theWord Bible Software)

It is interesting to me that our modern English Bibles generally use the Hebrew-based names of Old Testament characters as mentioned above, yet there are two notable exceptions. The first is the name Jesus, which is consistently transliterated from the Greek Iesous except when referring to the Old Testament character, in which case the exact same word is translated as Joshua. The second is the name of a couple of disciples and early followers of Jesus, known to us as James. His name in Greek is Ἰάκωβος Iakōbos, which one would expect to be transliterated/translated as Jacob. Instead, we have the rendering as James, an English equivalent of Jacob. Now, I’ve heard stories of how King James egotistically had it changed in his Authorized Version of the Bible. I don’t believe that to be the case, as all of the older Bibles listed in the previous section consistently say “Iames.”

So we have instances in New Testament translation where sometimes Hebrew-based names are substituted in rendering the Greek text, sometimes Greek names are simply transliterated, and sometimes English equivalents are used. Perhaps the goal is just to have something that is understandable to the average English reader.

What’s In a Name?

Yeshua is the Messiah. Jesus is the Messiah, the Christ. He is the same, no matter which name you use. You might even go on to say his name is Joshua or Yehoshua, but that would probably be incorrect. In the time period in which he lived, he was called Yeshua. Even though some say that this is a shortened form of Yehoshua, it isn’t a nickname. I can relate to that – my name is Larry; it is not Lawrence even though Larry is a shortened form of Lawrence. But really, all of that is just academic. The important thing is to know the person of the Messiah.

We’ve seen the etymology of the name Jesus – from Hebrew to Greek and then to English. There is no place for any nonsense etymology. Jesus does not mean “Hey, Zeus” or anything else related to this mythological god. It does not mean horse or pig. The people who propagate that stuff are just ignorant.

And the “sacred name” adaptations aren’t any better. Odd spellings and pronunciations like Yahshua or Yahusha are also nonsense. They are just adding to the confusion. I’ve yet to find any Hebrew scholar or someone educated in Biblical languages who thinks these are legitimate.

Another concern of many in our community is how the Divine Name, the Tetragrammaton יהוה is “translated.” Most literal English versions depart from using translation/transliteration and just substitute LORD. A few transliterate the vowels inserted by the Masoretes meant to actually prevent pronunciation of the name (a subject too extensive to cover here) and print Jehovah. I’m looking forward to the new Legacy Standard Bible (LSB), an update to the 1995 NASB from the same publisher, that transliterates the Tetragrammaton as “Yahweh” in the more than 6800 places it appears in the Old Testament text, without inserting it where it does not belong in the translation of the Greek New Testament. The LSB transliterates the name of the Messiah as Jesus.

UPDATE: I have received my copy of the full Legacy Standard Bible (LSB) and found it very disappointing. This translation contains no footnotes at all – no references to varying source texts, no alternate translations, and no Greek or Hebrew literal meanings. It is not useful for study. I cannot recommend the Legacy Standard Bible.

A Bible translation that transliterates the name of the Messiah from the Greek text will say Jesus. One that translates the name of the Messiah will say Joshua or Yeshua – or Jesus, or whatever name the translator believes to be correct. Translation is a process that is done using specific principles in order to obtain the desired result – something understandable to the reader.

For now, though, I will continue my practice of saying “Yeshua” when I read the name Jesus, and talking about Yeshua when his name comes up in conversation. When appropriate, like when I am in the company of those who know Jesus but aren’t familiar with the name Yeshua, I will use the name that best gets across the point of what is being said. It’s OK to say Jesus.

1I do not read Greek nor do I pretend to be a Greek scholar. The explanation here is simplified and this is really a more complex matter. Ἰησοῦς Iesous is the nominative case of this name (noun) and the one from which we get the name Jesus. That isn’t always the form used. In fact, this name appears in three different cases just in the first chapter of Matthew: Nominative (Ἰησοῦς Iesous in Matthew 1:16), Genitive (Ἰησοῦ Iesou in Matthew 1:1 and 1:18), and Accusative (Ἰησοῦν Iesoun in Matthew 1:21 and 1:25). This occurs throughout the New Testament. These distinctions do not exist in English, which is why translation is best left to those who have studied and mastered the language. Most of us only know enough to be dangerous, and I do mean that literally.

3Luke 3:29 in the source text of the KJV differs from the Alexandrian texts. It is actually a different name, Iose (Strong’s reference number G2499), the Genitive case of Ioses.