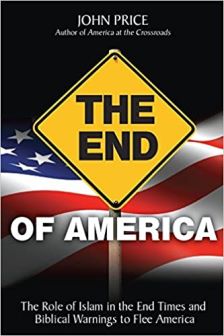 I first read this book back in 2014 during the reign of b hussein o. The author, John Price, was an Indianapolis attorney and former U.S. Senatorial candidate. Mr. Price passed away on January 7, 2017, the day after certification of the 2016 United States Presidential Election and a couple of weeks before the inauguration of President Donald Trump. According to his obituary, he spent the last five years of his life serving at Horizon Church in Jaco, Costa Rica. Once you’ve read this book that move to Costa Rica becomes significant.

A lot has happened since I read this book, so when I saw it on my shelf I decided to look at it again.

I will say up front that I do not agree with the initial premise from Mr. Price, but that isn’t a big deal. The warnings he gives, the call to repentance and the need for preparation are all still relevant. The author believes that the United States of America is the Daughter of Babylon described in Jeremiah 50 and 51. I have heard others express this thought as well, including at least one prominent and respected Hebrew Roots teacher. As I stated in my post The United States In Prophecy, I do not believe the US is directly referenced anywhere in Scripture.

Price’s position isn’t unusual, though, as there are a number of things written by the prophets that are understood differently by different people. One example of this is Isaiah 14, a very poetic prophecy about the King of Babylon that many people believe describes the fall of hasatan, the adversary, “Satan.” This is partially fueled by the misuse of the Latin term “lucifer” in the King James Version. But this isn’t about hasatan; it is (as it says) about the King of Babylon. The same can be said about Ezekiel 28, which very clearly says is about the King of Tyre and uses the same type of poetic hyperbole. We are never told the origin of hasatan in sacred Scripture.

Another example would be Revelation 17:5, where many people have interpreted Babylon, the mother of harlots, as the Roman church, and the harlot daughters as the protestant Christian denominations. Since John’s vision here occurs long after the fall of the Babylonian Empire, it obviously cannot be concerning literal Babylon. Is it describing modern Christianity? Maybe, but that doesn’t sit well with most Christians.

Could the last chapters of Jeremiah be describing the end-time nation of the United States? Personally I don’t think so – it is describing Babylon which had not yet fallen. However, the description of God’s judgment provides a valuable lesson for any world power once used by God yet not submitted to Him. It describes arrogance and corruption, and that seems to fit this country well.

The author goes through 21 “clues” that he believes identifies the US as the “daughter of Babylon,” then looks at the prophesied destruction. Whether or not the US is the object of this prophecy, the warnings of destruction are applicable to any nation in any time frame. And as is commonly said, the bigger they are, the harder they fall.

He fills pages with statistics, and though they are now somewhat dated, we can look at them and see how things have progressed. In some cases, we’ve become comfortably numb as the blatantly shocking evil of the b.h.o. administration is now just a part of everyday life. Have we as a nation passed the point of no return? Personally I’ve felt that way since the re-election of the reprobate leader in 2012.

Mr. Price doesn’t hold back in dispelling the idea that Islam is a religion of peace. The goal is conquering the world for their Allah no matter what it takes. In this book he reviews Muslim end-time prophecies, setting the stage for how in their own worldview things need to develop. He compares these with Biblical end-time prophecies concerning the Antichrist and the return of the Messiah, concepts also found in Islamic teachings.

Is there a rise in Islamic influence in our country? Of course there is, but here is a problem: since the election of Donald Trump, the American news media has been consumed with the internal battles in the United States to either dethrone or defend the President. Our country has become so divided over this issue that we seem to have forgotten about the worldwide threat of Islam. Occasionally we read of brief encounters, while at the same time electing more Muslims into our own government. Meanwhile, outside the United States these terrorists are wreaking havoc in the world.

In this book, Mr. Price refers to a web site TheReligionOfPeace dot com for a list of terror attacks. I’m not putting the actual address here, but you can type it in yourself. It has been updated since this book was written, and you can look at continuing terrorist attacks and see the trend. To be prepared and to get a better understanding of motives as well as to check what people quote, I believe every believer should have a copy of the Quran (as a reference, obviously not as a life guide). While you’re at it, get a copy of the US Constitution and the Communist Manifesto. These will help you understand the sometimes subtle changes taking place in this country.

Besides the threat of Islam, Mr. Price sees a second cause for a curse on America: abortion. The sacrificing and killing of innocent children is an abomination and abhorrence to our God, and he will not leave it unpunished. Again, the author mentions several statistics which are now outdated but show an alarming trend.

Mr. Price concludes that true believers should consider leaving the United States – “come out of her” (Revelation 18:4). Actually, this is the only logical conclusion for those who believe the US is Babylon or the daughter of Babylon. He gives several possible countries to which one might flee, with his criteria very clear:

These figures come from the CIA World Factbook and other online sources. I have not tried to verify his numbers, and they no doubt have changed. But an important thing to see here is that Mr. Price is not just writing sensationalism in order to sell books. As I mentioned in the opening paragraph, Mr. Price spent the last five years of his life in Costa Rica.

In the final chapters, Mr. Price offers “Irrefutable Proof that God has been Warning America Not to Curse Israel” and practical steps to take regarding when to leave America and where to go.

Whether or not you agree with this author, his insight is definitely worth consideration. You can pick up this book on a Kindle (or the Kindle app for your phone or tablet) for just $0.99. While your at it, get the Kindle edition of a Bible, a Quran, the US Constitution and the Communist Manifesto at little or no cost. Remember, when it all goes down, disconnect your Kindle from the internet to keep your resources.

Buy from Amazon: The End of America – Paperback

Buy from Amazon: The End of America – Kindle Edition