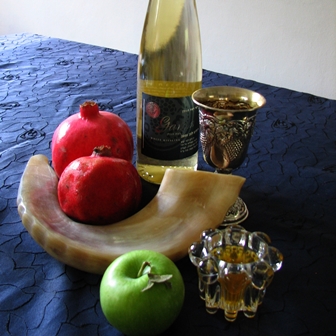 Yom Teruah, or Rosh Hashanah, is celebrated on the first day of the seventh Biblical month, Tishrei. It is one of the annual Sabbaths, and this year it falls on Saturday, September 16, 2023, which is also the Weekly Sabbath. More accurately, with the day beginning at sundown the Sabbath begins on Friday evening, September 15.

The first day of the seventh month is the beginning of the Hebrew year. That may sound a little strange, but there are two primary annual cycles in the Hebrew calendar (and a few more besides). Often these are designated as the Religious or Ecclesiastical Calendar and the Civil Calendar, and they begin at different times. That really isn’t so unusual. Consider that the Gregorian calendar begins on January 1, counting the years A.D. (anno Domino, Latin for the year of the Lord). Using the same months, the fiscal year for the United States begins on October 1. I used to work for an organization that began its year on July 1. It’s all just a method of counting.

According to tradition, the world itself was created on the 25th day of the preceding month, Elul. Six days later, mankind was created – the first day of Tishrei. So the years being counted are the years of mankind, and that number increments on 1 Tishrei, Rosh Hashanah, literally the Head of the Year. But when the Israelites made their exodus from Egyptian slavery in the spring of the year, God said, “This month shall be the beginning of months for you; it is to be the first month of the year to you” (Exodus 12:2). Following God’s designation of months, the day we are discussing now is the beginning of the seventh month.

Again the LORD spoke to Moses, saying, “Speak to the sons of Israel, saying, ‘In the seventh month on the first of the month you shall have a rest, a reminder by blowing of trumpets, a holy convocation. You shall not do any laborious work, but you shall present an offering by fire to the LORD.'”
(Leviticus 23:23-25)

That’s the full description of the day given in the chapter that outlines all of God’s Appointed Times. The only other place this observance is specifically mentioned in Scripture is when the “offering by fire” is described. This is where we get the name Yom Teruah.

Now in the seventh month, on the first day of the month, you shall also have a holy convocation; you shall do no laborious work. It will be to you a day for blowing (yom teruah) trumpets. You shall offer…
(Numbers 29:1-2)

This passage then goes on to detail the offerings to be made.

The Biblical month is directly tied to the cycle of the moon. Although we have the ability to calculate very precisely when the moon is in its different phases, in ancient times the beginning of the month was not official until the new moon was physically sighted. Yom Teruah is the only Appointed Time that falls on the first day of the month, and could only be confirmed when it actually happened.

You may notice that on a traditional Jewish calendar this celebration lasts for two days. In the ancient world, without instantaneous radio communication or the internet, it took considerable time to relay the message throughout the land and to the scattered tribes that the new moon had been sighted, the seventh month was beginning and it was now God’s Appointed Time for a Sabbath rest and a holy convocation. Since some might not even be aware it was a Feast day until it was nearly over, this holiday was extended for an additional day.

Traditional observance begins the month before Rosh Hashanah. The month of Elul is a time of introspection and self-examination followed by the “Ten Days of Awe” from Rosh Hashanah to Yom Kippur. It is believed these days correspond to the 40-day period Moses was on the mountain receiving the second set of tablets. Psalm 27 is read each day beginning 1 Elul.

Synagogues usually hold a service on the evening beginning Rosh Hashanah and also the following day. During the service, the shofar (ram’s horn) is sounded using four different calls in a defined order. This is further described below along with the blessings. Additional celebrations often include sweet foods, especially sliced apples and honey and a special round challah with raisins to welcome the sweetness of the new year.

On the afternoon of Rosh Hashanah, many congregations will gather at a body of water for the Tashlich service, a practice derived from Micah 7:19:

He will again have compassion on us;
He will tread our iniquities under foot.
Yes, You will cast (tashlich) all their sins
Into the depths of the sea.
(Micah 7:19)

To simulate this, participants throw pebbles or pieces of bread into the water representing our repentance and God’s forgiveness of sin. I wrote about my own experience with this here.

But of that day and hour no one knows, not even the angels of heaven, nor the Son, but the Father alone.
(Matthew 24:36)

Believers in Messiah Yeshua understand that the Spring Feasts (Passover, Unleavened Bread and Shavuot) had their prophetic fulfillment in Yeshua nearly 2000 years ago. We anticipate the prophetic fulfillment of the Fall Feasts (Yom Teruah, Yom Kippur, Sukkot and Shemini Atzeret) at Yeshua’s second coming. These begin with the sounding of the “awakening blast” on Yom Teruah.

Batya Wootten, in her book Israel’s Feasts and Their Fullness, makes a strong case for blowing two silver trumpets rather than a shofar on Yom Teruah.

The LORD spoke further to Moses, saying, “Make yourself two trumpets of silver, of hammered work you shall make them; and you shall use them for summoning the congregation and for having the camps set out. “When both are blown, all the congregation shall gather themselves to you at the doorway of the tent of meeting. “Yet if only one is blown, then the leaders, the heads of the divisions of Israel, shall assemble before you. “But when you blow an alarm, the camps that are pitched on the east side shall set out. “When you blow an alarm the second time, the camps that are pitched on the south side shall set out; an alarm is to be blown for them to set out. “When convening the assembly, however, you shall blow without sounding an alarm. “The priestly sons of Aaron, moreover, shall blow the trumpets; and this shall be for you a perpetual statute throughout your generations. “When you go to war in your land against the adversary who attacks you, then you shall sound an alarm with the trumpets, that you may be remembered before the LORD your God, and be saved from your enemies. “Also in the day of your gladness and in your appointed feasts, and on the first days of your months, you shall blow the trumpets over your burnt offerings, and over the sacrifices of your peace offerings; and they shall be as a reminder of you before your God. I am the LORD your God.”
(Numbers 10:1-10)

Wootten finds that this relates specifically to the reunification of the two houses of Israel in the end times, a prophetic fulfillment of this first of the Fall Feasts that begins the traditional High Holy Days. She observes:

Could it be that, thinking it is the time when the “trump” is sounded and Believers are “raptured” is leading us to miss the true meaning of this feast? Could it instead be that it foreshadows the Father’s reunited people of Israel beginning to call out and declare truth to all Israel? Is it a time that marks the beginning of a work that has yet to be done? To answer, let us listen with the ears of the spirit to a brief outline of this feast:

The Father told Israel to make two trumpets of silver hammered work. Priests were to blow them. Their united sound would be used to summon all Israel. They were used to have their camps set out, and to be sounded when going to war – that we might be remembered before our God, and by Him, be saved from our enemies. The two silver trumpets of Numbers 10 were used to: gather the whole assembly (v.2), move the camp (v.5), prepare for and be remembered in war (v.9), celebrate New Moons and all Feasts (v.10).

The “awakening blast” is a call to repentance, initiating the Ten Days of Awe leading to Yom Kippur. Batya Wootten suggests specific prayer focuses for each of these ten days, and with her permission they are reproduced here.

These are taken from the Messianic Siddur for Shabbat.

Blessing for Hearing the Shofar

Blessed are you, Oh Lord our God, king of the universe, who has
Sanctified us with his commandments and commanded us to hear the voice of the shofar.

This blessing is followed by the sounding of the shofar. Daniel Perek, author of the Messianic Siddur for Shabbat, describes it this way:

The congregation rises. Each of the thirty (30) calls is announced and then blown. The congregation contemplates the sound of the Shofar. The Tekiah is a long, single blast, to awaken those who sleep. The Shevarim are three (3) short blasts, crying out for relief from distress. The Teruah is a series of nine (9) blasts, sounding the alarm, to call the congregation to assemble, and to battle. The Tekiah HaG’dolah is the final blast.

Directions
Mix oil, honey, sugar and applesauce. Add dry ingredients, mix thoroughly. Pour into a greased 8- or 9-inch square pan. Garnish with sliced almonds. Bake at 350 degrees for 35-40 minutes. Toothpick should come out clean and cake should spring back when touched.

What Is Yom Teruah?
Biblical Time – Elul
Hallelujah
So Far Has He Removed Our Transgressions From Us

3 thoughts on “Yom Teruah for Believers in Yeshua”