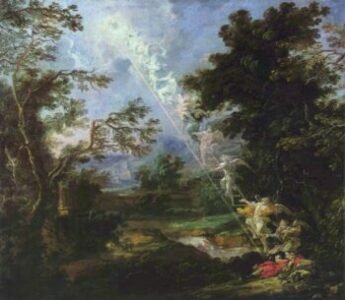 As the Titanic was sinking and passengers were frantically trying to do something to save their lives, musicians from the ship’s band calmly stood on the deck and played the old hymn “Nearer My God to Thee.” Well, that’s the story line in the movie at least. Actual accounts vary as to what song was played, and there may have been more than one. All eight members of the ship’s band perished in the disaster along with more than 1,500 of the passengers and crew. All of the treasures on board sank more than two miles to the bottom of the ocean.

Torah Portion Vayetze “and he went out” opens with Jacob setting out for Haran, his mother’s homeland. He has two purposes in mind: to escape his brother Esau and to find a wife. God had another purpose in mind.

The Bible simply tells us that Jacob went out, “came to a certain place and spent the night there, because the sun had set” (Genesis 28:11). It is there that Jacob has his dream of the ladder reaching to heaven.

The extra-biblical book of Jashar

(Jewish legend, not inspired Scripture) fills in a few other details. According to legend, before Isaac sent Jacob to Haran he gave him many gifts along with silver and gold. He departed seemingly safe and secure with everything he needed, but it was not a peaceful trip. His brother Esau had sent his son Eliphaz in hot pursuit to kill Jacob. When Eliphaz caught up with him, Jacob gave him the silver, gold and everything he had with him in exchange for his life. Eliphaz returned home, and Jacob went a little further before laying down in that certain place for the night – alone and indigent. His Titanic was sinking.

God confirmed to Jacob the covenant He had made to Abraham and Isaac, declaring “Behold, I am with you and will keep you wherever you go, and will bring you back to this land; for I will not leave you until I have done what I have promised you” (Genesis 28:15). Recognizing that he had been in the very presence of Yahweh, Jacob erected a monument from the stone he had slept on, anointed it with oil and called it Bethel, Hebrew for The House of God.

By the end of this week’s Torah portion, Jacob – who was destitute when he arrived at “a certain place,” heads back to his home with two wives, eleven sons, one daughter, a multitude of livestock and riches beyond his imagination. Eventually he will return to Bethel where God will again confirm the covenant with him and give him the name Israel (Genesis 35).

The book of Jashar

tells us that when Jacob was eighteen years old his father sent him “to the house of Shem and Eber, and he learned the instructions of the Lord, and Jacob remained in the house of Shem and Eber for thirty-two years, and Esau his brother did not go, for he was not willing to go, and he remained in his father’s house in the land of Canaan” (Jashar 28:18). Jacob knew about God. He knew and probably did what he was supposed to do. But he needed more than that. He needed a personal encounter with God at Bethel. Jacob’s heart was changed when he realized “Surely the LORD is in this place…How awesome is this place! … this is the gate of heaven” (Genesis 28:16-17).  His desire now was to be “Nearer My God to Thee.”

Sometimes those of us in the Messianic movement get really excited about the new things we have learned and things we are supposed to do. That isn’t bad, but it can’t be our focus or what drives us. We can never lose sight of Yeshua, “the way, the truth, and the life” (John 14:6) and the “one mediator between God and man” (1 Timothy 2:5).  He is the ladder, and our hearts must be our Bethel as we cry out, “Nearer My God to Thee.”

Ponder these words as the hymn writer tells the story of Jacob’s dream.  Sing it as your earnest prayer.