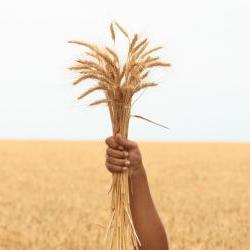 As we approach the Appointed Time of Shavuot, I want to share a portion of a letter I received from a friend some time back. I’ll just call him “Tom” as it is necessary that I not use his given name. Tom is currently incarcerated. If that happens to catch you a little by surprise, I encourage you to read my posts Why I Hang Out With Criminals and Ministering to Those in Prison.

Tom is a Messianic Jew, and writes from that perspective. We don’t always agree on everything, and we learn from each other. His resources are limited, so I often try to find things for him – such as the poem he mentions in this study. That in itself was an exciting discovery.

Here is the portion of his letter dealing with Shavuot and counting the Omer. I have reproduced it just as he wrote it, with only minimal editing for spelling and punctuation. I hope you enjoy it.

My studies have been all over the map! A lot of what I have been studying consists of Jewish tradition. Let’s start with the traditions surrounding Shavuot, since it is coming up quickly. According to Jewish tradition, the Holy Day of Shavuot is also called “The Holiday of the Giving of the Torah (Zman Matan Toratenu). Tradition tells us that on that day Moses received the tablets of the Torah from Yahweh on Mt. Sinai. Have you ever heard that before?

Also on Shavuot the poem Akdomot is read in the synagogue. Do you know this poem? I’d like to hear it, or read it if you do. I know also that Jewish tradition has “Megiloth Ruth” (the scroll of Ruth) read on Shavuot. This is what I plan on doing personally. I know the story and it is a beautiful story.

Ruth, great-grandmother of King David, is a Moabite princess. She marries a Jew in the land of Moab. When her husband passes away, Ruth turns her back on an easy life of luxury in Moab to return with her mother-in-law Naomi to Israel. Choosing a life of poverty in preference to giving up her religion and principles, Ruth became the symbol of loyalty and piety.

There are also some special dishes eaten on Shavuot: “Blintzes” are a cheese pastry usually eaten on Shavuot. They symbolize the Torah as being as good as milk. They also symbolize the land of Israel which was once a land flowing with milk and honey. “Teiglach” are candies made with honey to signify that the Torah is as sweet as honey. Have you heard of either of these?

Since we are in the count up to the Omer I have another topic “Lag BaOmer.” Ever heard of it? Well when the Jews were under the domination of Rome, they rose in revolt against their oppressors. The army of rebellion was led by Bar Kochba (132 CE) and was inspired by Rabbi Akiba (one of the greatest sages). During the revolt pupils of Rabbi Akiba died in a plague. On Lag BaOmer the plague ended. The revolt was finally broken by the Romans, whose overwhelming power no other people dared to defy. Therefore, during the counting of the Omer, no weddings are held. On Lag BaOmer, however, the day the plague ended, it is permitted to conduct a wedding ceremony or any other celebration.

Another sage of that period, Rabbi Simon Ben Yochai, called Bar Yochai, defied the Romans by establishing a network of schools throughout the land. The Romans sought to kill him. He escaped to hide in a cave. On Lag BaOmer the children came to him to continue their studies. That is why Lag BaOmer is also treated as a children’s holiday. They celebrate by going on outings and picnics, recalling the actions of those children who went out to the fields to Bar Yochai to study the Torah.

Don’t fret; I have been studying Biblical principles of the Omer also!! Pentecost is the 50th day after the Sabbath of Pesach (Leviticus 23:15-16), thus it’s the first day of the week. Pentecost is also called the Festival of weeks (Deuteronomy 16:10), the Festival of Harvest (Exodus 23:16), and the day of First Fruits (Numbers 28:26). Pentecost was traditionally seen as the day Moses received the law as I mentioned earlier in this letter. Now it will be seen as the day the Spirit came to fulfill Yahweh’s promise as given in the law and the prophets. I have read the account in Acts 1-3 earlier today. Why are there so many different names for the same festival? Just curious if it became this way in the translation or if there was a reason behind it.

If you are interested in the poem Tom mentioned, Akdomot (or Akdamut Milin), you can read an English translation here.

2 thoughts on “On Shavuot (A Letter from Tom)”