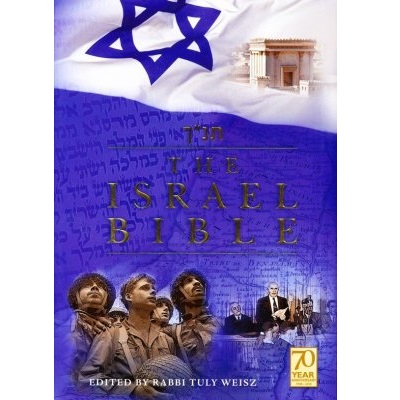 The Israel Bible is a new dual-column Hebrew and English edition of the Tanakh, published in 2018. The introduction to this Bible states the aim is “to honor ‘the God, the People and the Land of Israel from an Orthodox Jewish perspective. To that end, The Israel Bible follows the traditional Jewish ordering of the books and the customary Hebrew division of chapters.”

The layout is two parallel columns on each page, with the Hebrew Bible in the right-hand column and the corresponding English translation in the left. Although the publisher has used the word “interlinear,” this really is two parallel texts.

Most chapters have one verse highlighted, and that verse only also includes transliterated Hebrew under under that spans both columns. This is a little bit distracting in the text, but a very nice addition. Then, at the bottom of the page with the highlighted verse, there is a short note commenting on the verse from one or more topical categories. Sometimes the articles span more than one page, and sometimes (as in the Psalms, which are shorter chapters) there is more than one verse referenced in the note.

The introduction identifies the notes as being in four categories, each with its own icon:

I have not been able to find anywhere in this book where it identifies exactly which Hebrew text is used. I am guessing it is Biblia Hebraica Stuttgartensia (BHS), a Masoretic Text as preserved in the Leningrad Codex, but I am not certain. 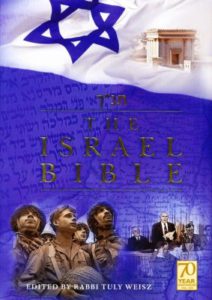 According to the publisher, “the English translation was adapted by Israel365 from the [1985 New] JPS Tanakh.” It should be noted that it is not exactly the same as the 1985 New Jewish Publication Society Tanakh. The introduction to The Israel Bible says “We applied the NJPS verbatim, except for a select list of nouns, which we replace with their traditional Hebrew names. This is true even when we found the NJPS translation to be different than the popular translation of a word or phrase and when the NJPS switched the order of the text for the sake of clarity (see, for example, Ezekiel 24:22-24).”

One of the most notable variations is how the Divine Name, yod-hey-vav-hey, is represented. The 1985 JPS follows the tradition used in most Christian Bibles and renders it as LORD – an upper-case “L” and the rest of the word in SMALL CAPS. In The Israel Bible, the Hebrew text shows it with the Masoretic vowel pointing so that you do not properly pronounce The Name, incorrectly rendered in some English Bibles as Jehovah. The English translation has been changed from LORD to Hashem, a Hebrew term literally meaning The Name.  This is a widely accepted practice and is used in popular Bibles such as The Stone Edition Tanach and The Stone Edition Chumash. Hashem is shown in italics, as are all Hebrew transliterations in this Bible. Interestingly, when this appears in one of the selected verses that is transliterated, the Hebrew transliteration reads “a-do-NAI.”

There are a few places where Hashem is not used and the text reads LORD (all upper-case), such as in the phrase LORD of Hosts. Here are a couple of examples:

How lovely is your dwelling place, LORD of Hosts. (Psalm 84:2)

He said to me, “O mortal, can these bones live again?” I replied, “O Hashem, only You know.”

The words translated “O mortal” are ben-adam, literally, son of man. “O mortal” is also how the JPS Tanakh translates this verse. However, the words translate “O Hashem” are adonai yahweh, which the JPS renders as O Lord GOD (using upper-case and small caps in GOD to represent the Divine Name). The Israel Bible just uses Hashem to replace the entire phrase. Look at how these appear in these other translations:

He asked me, “Human being, can these bones live?” I answered, “Adonai ELOHIM! Only you know that!” (CJB)

Then He said to me, “Son of man, can these bones live?” I answered, “ADONAI Elohim, You know.” (TLV)

The TLV got it backwards. In all of the rest, you can clearly see that Adonai/Lord precedes the Divine Name. In The Israel Bible, you have no indication a compound term is used at all.

Most of the other changes appear to be proper nouns. For example, instead of the JPS reading of Abraham, Isaac and Jacob, the Israel Bible reads Avraham, Yitzchak and Yaakov. Israel is Yisrael, but Egypt is still Egypt (I expected to see Mitzrayim). Priests are kohanim, the altar is the mizbayach and so forth. It isn’t difficult to get used to. It does not go to the extremes some sacred-name Messianic Bibles do, and is nothing like the near-ridiculous mix of quasi-Hebrew and English found in unorthodox versions like the Halleluyah Scriptures. In the back of The Israel Bible is a complete list of the Hebrew noun changes, including the actual Hebrew word, transliterated pronunciation, and English equivalent.

There are numerous footnotes in the NJPS Tanakh, but these footnotes do not appear in The Israel Bible. One other interesting thing I noticed is in Exodus 6:3. My NJPS Tanakh actually has the characters yod-hey-vav-hey in the English text. I am not familiar enough with the JPS Tanakh to know if this occurs anywhere else. The Israel Bible simply says Hashem in this place.

Features of The Israel Bible

Comparing it to other bilingual Hebrew-English Bibles, I find the two-column format easier to use than a single-column facing-pages format. The individual verses in both the Hebrew and English columns are right across from each other, and for someone like me who knows only a little Hebrew and is pretty slow at finding words and figuring out phrases, that is a big help. With the facing-pages format, as in the Stone Edition Tanach, it can take a long time just to get started.

With that said, though, there are things in the Stone Edition Tanach that you won’t find in The Israel Bible. They reflect formats that are found in the Torah scroll, like the enlarged letters at the beginning of Bereshit and in the Shema, and the diminished aleph in the first word of the book of Vayikra. It does not contain cantillation marks or other special markings, such as the dots over the word vayishakehu “and kissed him” in Genesis 33:4. The Stone Edition Tanach displays the Song of Moses in Exodus 15 and the Psalm of David in 2 Samuel 22 in a brick wall layout, and the Second Song of Moses in Deuteronomy 32 in double column format.

Most readers won’t be concerned about these formatting issues, recognizing that this is Hebrew text and not a Torah scroll. If you want these features, you will want to purchase a Stone Edition Tanach or The Jerusalem Bible (Koren).

Besides the notes on selected verses within the text, there are several other helps in The Israel Bible. There is a list of the weekly Torah portions with their corresponding Haftarah reading. In addition, there is a listing of Torah portions for special occasions like holidays, new moons, special Sabbaths, fasts and other observances. Selected liturgical blessings are printed in Hebrew, transliterated Hebrew, and in English. An extensive index is in the back of the Bible. The Israel Bible concludes with a Prayer for the State of Israel, a Prayer for the Welfare of Israel’s Soldiers, and the lyrics to the national anthem, Hatikvah. These are all presented in Hebrew, transliterated Hebrew, and in English.

The Israel Bible is available in print in a hardcover edition only at this time. There is also a Kindle e-book edition in English only (no Hebrew). It is somewhat difficult to navigate, and you might not think it worth the $9.99 price.

Overall, The Israel Bible is worth considering for your library. I think every Messianic believer should have access to the Bible in Hebrew and in a translation not created by Christian scholars. This one fills both of those needs nicely with some additional helps as well. Even though this is published from an orthodox Jewish perspective, the “Praises” page on the publisher’s web site gives favorable comments by several well-known people in the Messianic movement, including pastor Mark Biltz, pastor Keith Johnson, Laura Densmore (Hebrew Nation Radio) and Tommy Waller (HaYovel).

In addition to The Israel Bible, here are a few other alternatives for a bilingual Hebrew-English Bible:

NJPS Hebrew-English Tanakh, Jewish Publication Society – this is the base translation used for The Israel Bible.  The format is similar, with parallel columns of English and Hebrew on each page. It is in paragraph format rather than individual verses, which might be preferable. It has footnotes from the NJPS translation, but not the categorical notes found in The Israel Bible.
Buy from Amazon
Buy from Christian Book Distributors

The Stone Edition Tanach (Artscroll), Mesorah Publishers – this is a traditional Jewish translation in single-column facing-pages format. The Hebrew text is on the right page and corresponding English text on the left page. The full-sized edition has large Hebrew text that is much easier to read than most other Hebrew Bibles.
Buy from Amazon

The Jerusalem Bible, Koren Publishers – this is a traditional Jewish translation of the Tanach in single-column facing-pages format similar to The Stone Edition, including the enlarged/diminished letters and brick/column formatting mentioned above, but without rabbinic commentary. It is generally much less costly than The Stone Edition.
Buy from Amazon

Hebrew-English Bible NASB , The Bible Society In Israel – this is a complete Bible including both the Old and New Testaments. The English is the New American Standard Bible, with the Old Testament Masoretic Text in Hebrew and a modern translation of the New Testament in Hebrew. This Bible is in two-column format, with the English text on the inside columns of facing pages and the Hebrew text on the outside columns. You may also be able to find a previous bilingual Hebrew-English edition with the New King James Version from this publisher.
Buy from Amazon

ESV Hebrew-English Old Testament, Crossway – this is the Old Testament from the English Standard Version and BHS Hebrew text on facing pages. The Hebrew text includes cantillation marks in addition to vowel points, and there are extensive side notes and footnotes in the Hebrew text in Hebrew and sometimes Greek (referencing the Septuagint). A companion edition with the ESV Greek-English New Testament is also available.
Buy from Amazon
Buy from Christian Book Distributors