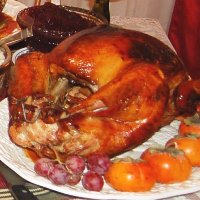 As I write this, we are at the conclusion of the Biblical Appointed Times for this year. The Scriptures even call this time after Sukkot, the Feast of Tabernacles, the “turn of the year” (Exodus 34:22). It is interesting that we call these past few weeks “the Fall Feasts.” The Bible really only mentions two seasons (check it out!). Now the summer – and the year – has ended, and the winter is about to begin. After the winter, at the “return of the year” (2 Samuel 11:1), we will start again and celebrate “the Spring Feasts” when the Summer begins.

In the mean time, during the winter there are some other celebrations even though they are not among Yah’s Appointed Times commanded in the Torah. Many Messianic believers will enjoy Hanukkah (John 10:22-23) and Purim (Esther 9:20-28) while avoiding the pitfalls of Halloween, Christmas and a few others. But there is one other celebration in my country, the United States of America, that we should not overlook: Thanksgiving Day.

Now, I’ve read of those who refer to all of these times that aren’t specified in Torah as “pagan.” That’s just nonsense. Here in the USA we set aside times like Memorial Day, Independence Day and Veteran’s Day to celebrate our heritage and honor those who fought for it. We thank God for the land we live in. Other countries have similar holidays. And on Thanksgiving Day, we as a nation set aside a day to offer thanks to God for the bounty of the harvest.

“I do therefore invite my fellow citizens in every part of the United States, and also those who are at sea and those who are sojourning in foreign lands, to set apart and observe the last Thursday of November next, as a day of Thanksgiving and Praise to our beneficent Father who dwelleth in the Heavens.”
(President Abraham Lincoln, October 3, 1863)

The original story of Thanksgiving goes back almost 250 years before that, when the Puritan Separatists we call Pilgrims crossed the Atlantic Ocean in the Mayflower and landed at Plymouth Rock. Hopefully the revisionist history taught in America’s public schools hasn’t changed the story too much. Multiple sources suggest that these Pilgrims considered the King of England as Pharaoh and their voyage across the ocean as crossing the Red Sea, passing through the wilderness to the Promised Land.

They arrived in early November, but not at the place they meant to settle. Instead of continuing on to their intended destination of Virginia, they decided to stay north at Cape Cod. Even that sounds a little like the 2-1/2 tribes of Israel who decided to settle east of the Jordan River. Setting up a government in the new territory began with the execution of The Mayflower Compact, a document that begins with the words “In the Name of God, Amen.”

Only about half of them survived the harsh winter. A year later, after their first harvest in the new land, they held a three-day harvest festival. It was early October, and some believe it was patterned after the Biblical Feast of Tabernacles.

“…when you have gathered in the crops of the land, you shall celebrate the feast of the LORD… ”
(Leviticus 23:39).

Certainly the root of some popular holidays is questionable if not downright evil. Is Halloween pagan? You don’t have to look long to answer the question, and no follower of Yeshua should want to participate. It doesn’t matter if you exchange “trick-or-treat” for “trunk-or-treat” and put it in a church parking lot. This is, as they say, just putting lipstick on a pig. That one is easy.

What about Yule logs, mistletoe, holly wreaths or Christmas trees? You can easily research those things and find where those customs originate. In doing so though, we need to stick to the facts; they will speak for themselves and there is no need to embellish them. Sometimes we search too hard and invent “proof” of our positions.

Thus says the LORD,
“Do not learn the way of the nations,
And do not be terrified by the signs of the heavens
Although the nations are terrified by them;
For the customs of the peoples are delusion;
Because it is wood cut from the forest,
The work of the hands of a craftsman with a cutting tool.
“They decorate it with silver and with gold;
They fasten it with nails and with hammers
So that it will not totter.
(Jeremiah 10:2-4)

I can’t tell you how many times I’ve read or heard someone say this is describing a Christmas tree – something that didn’t even exist in the time of Jeremiah. But taking it out of context and looking for reasons to condemn a practice, we can easily turn this decorated-with-silver-and-gold description into the modern Christmas tree. I’m not at all advocating for the Christmas tree, which again has no place in the believer’s home. But if you continue reading, it becomes clear that in this passage the prophet is simply describing a gold- and silver-clad wooden idol:

“Like a scarecrow in a cucumber field are they,
And they cannot speak;
They must be carried,
Because they cannot walk!
Do not fear them,
For they can do no harm,
Nor can they do any good.”
(Jeremiah 10:5)

Unlike Halloween, Christmas and Easter, there is not one shred of evidence that the Thanksgiving celebration is rooted in or has any association with paganism. Quite to the contrary. From the beginning, Thanksgiving Day has been about giving thanks to the one true God, creator of all.

Those who propose a pagan origin to Thanksgiving usually point to the fact it is a harvest festival. There are harvest festivals in many different cultures, some of which are said to praise the gods of nature or other pagan gods. But because some festivals are for false gods does not make all festivals evil.

We who are pursuing a truly Biblical lifestyle rightly avoid Christian customs that we have now learned are a mixture of the holy and the profane – or “pagan,” though we often over-use that word. Take for example the Eucharist, a blended adaptation of “the Last Supper,” which was really our Messiah’s final observance of the Passover, and ancient pagan practices. We Messianics would never use the term “Eucharist,” which now think of as a little round wafer and a small sip of wine that mystically transforms into the body and blood of Christ.

The word itself, though, is actually taken from the New Testament:

And when He had taken a cup and given thanks (Greek: eucharisteésas), He said, “Take this and share it among yourselves;
(Luke 22:17)

And when He had taken some bread and given thanks (Greek: eucharisteésas), He broke it and gave it to them, saying, “This is My body which is given for you; do this in remembrance of Me.”
(Luke 22:19)

So, we avoid the term “Eucharist” even though the word actually means “thanksgiving.” Alas, it is a Greek word, and Greek must be bad, right? Most Hebrew translations of the New Testament use a form of the word barak (bless) in these verses. Messianic Bible translations like the Complete Jewish Bible or Tree of Life Version say he offered a bracha or a blessing, but that is more likely applying a cultural tradition rather than a literal translation of the word eucharisteésas. Yeshua was giving thanks.

The word in the Hebrew Bible translated into the English word Thanksgiving is todah, Strong’s Hebrew word #H8426. It’s pretty common for those of us who speak English to toss around a few key Hebrew words when we get together for fellowship. We greet each other with “shalom,” wish each other “chag sameach” at our Feast gatherings and congratulate each other with “mazel tov!” It isn’t too unusual to hear someone say “todah” when we want to say “thank you.” Do you know the root of that word?

The noun todah derives from the verb yadah (#H3034) meaning – among other things – thanksgiving, praise and confession of the name of God. The name Yehudah (Judah) is also related to the verb yadah. Remember that when his mother Leah named him she said, “This time I will praise the LORD“ (NASB) or “This time let me gratefully praise Hashem” (Stone).

Hodu, a form of the verb yadah, begins one of the most common anthems of praise found in the Bible:

So on a national Day of Thanksgiving we make a special effort to “give thanks to the LORD, for he is good.” Families and friends gather to enjoy a meal and fellowship. When you encounter those who loose focus in the hustle and bustle of the holiday season, take this opportunity to remind them of the blessings and provisions our Heavenly Father has given, both to the righteous and the unrighteous (Matthew 5:44-45). Your act of charity may be the very thing that turns them toward the truth.

Todah and yadah – thanksgiving and praise. These are the very terms used by President Lincoln in his proclamation.

“When you have eaten and are satisfied, you shall bless the LORD your God for the good land which He has given you.
(Deuteronomy 8:10)