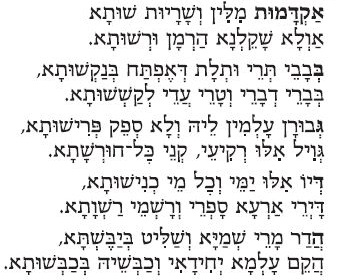 This beautiful hymn was composed in 1917 by Nazarene Pastor Frederick M. Lehman. The third verse has long been one of my favorites, and its origin is even more interesting:

As we approach the celebration of Shavuot (Pentecost), these poetic lines are quite appropriate. They are a variation of an Aramaic poem written toward the end of the eleventh century by Rabbi Meir Ben Yitzchak Nehorai in Worms, Germany. The piyut (liturgical poem) Akdamut Milin, meaning Introductory Words, is part of the traditional service in Jewish synagogues on Shavuot, the Feast of Weeks (also known by the Greek name Pentecost). Because Shavuot is believed to be the day that Moses received the tablets on Mount Sinai, the custom is to read the Ten Commandments as part of the service. Before doing so, this poem of “Introductory Words” is first read.

The full text can be found in The Complete Artscroll Siddur. Notes in the Siddur describe it as being “written in a terse, difficult Aramaic.” The structure is intriguing. It consists of ninety lines, with the first forty-four lines being a double acrostic – the first two lines begin with the Hebrew letter Aleph, the next two with the Hebrew letter Bet, and so on. The first letters of the remaining lines spell out the author’s name and a blessing: “Meir, the son of Rabbi Yitzchak, may he grow in Torah and in good deeds. Amen. Be strong and of good courage.” Each line of the poem ends with a word having the suffix tav-aleph, the last and first letters of the Hebrew alphabet. This is said to signify that the cycle of Torah study is endless.  You can see these characteristics in the image above.

For copyright reasons, I have not reproduced the full text from The Complete Artscroll Siddur. I did find an English translation from an online source, though it varies slightly from the more literal translation in the Siddur, possibly for poetic form. You can read it here.

What caught my eye as I was reading the Akdamut Milin was this portion near the beginning:

Were all the skies parchment,
And all the reeds pens, and all the oceans ink,
And all who dwell on earth scribes,
God’s grandeur could not be told.

These words are the inspiration for the third verse of the hymn “The Love of God.” Just a few weeks ago we sang this at our Sabbath home fellowship, during the counting of the omer leading up to Shavuot. As long as I have loved this hymn, I had never actually known the origin of this beautiful final verse.

In this the love of God was made manifest among us, that God sent his only Son into the world, so that we might live through him. In this is love, not that we have loved God but that he loved us and sent his Son to be the propitiation for our sins (1 John 4:9-10).

There are also many other things that Yeshua did. If all of them were to be written one by one, I suppose that not even the world itself will have room for the books being written! (John 21:25).

Oh Love of God, how rich and pure
How measureless and strong
It shall forever more endure
The saint’s and angel’s song

I hope you enjoy this wonderful old hymn.