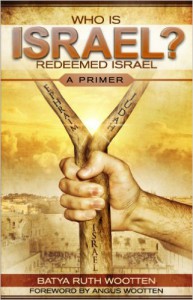 Nothing – absolutely nothing – will destroy my faith in Jesus or my hope in Him for salvation. When I was awakened to the Hebraic roots of my faith (though I didn’t know what it was called), this is the one thing that I determined was unshakable. I will always hold on to the fact that Jesus, who’s Hebrew name is Yeshua, is the way, the truth, and the life, and He is the only way to the Father.

Batya and her husband, Angus Wootten, are pioneers in the Messianic Two-House movement and are the founders of the Messianic Israel Alliance, now known as the Alliance of Redeemed Israel. In my opinion, Batya is by far the leading human authority on this subject. Her first book, “In Search of Israel”