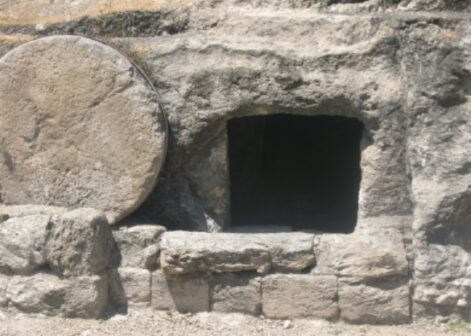 Easter Sunday is the annual commemoration of the resurrection of Jesus Christ. The New Testament is very clear that His crucifixion took place at the Jewish observance of Passover, and Christians understand the prophetic symbolism of the Passover sacrifice. In fact, Paul writes that “Christ, our Passover lamb, has been sacrificed” (1 Corinthians 5:7). How is it then, that this year (2016) Easter, on March 27, occurs almost a month before Passover on April 22?

Establishing the Date for Passover

Both Easter and Passover appear to be on dates that change every year according to our modern Gregorian calendars. However, Passover is actually a fixed date on the Hebrew calendar – according to the Bible it is on the fourteenth day of the first month (Leviticus 23:5 and others). The date never changes; what we are left with is determining when is the beginning of the first month.

In the Jewish community, this is not an issue. In the fourth century CE, a calculated calendar system was developed, attributed to Rabbi Hillel II, establishing the months of the Hebrew calendar. The month for Passover needs to be in the spring of the year, but a year of twelve lunar months only consists of about 354 days while the cycle of the sun, determining the seasons, is about 365 days. The Hillel calendar uses a system of adding a “leap month” in certain years to keep all of the Biblical festivals in their correct agricultural season. According to this calendar, in a few weeks we will be in a leap month – a thirteenth month – for this year.

However, among those pursuing a Biblical faith there is considerable debate. It is one of the two most passionately contested controversies in this movement. Since the Bible does not specifically say “this is how you know it is the first day of the first month of the year,” various interpretations of Biblical and extra-Biblical texts have led to a number of proposed methods. It is not my intention here to defend one over the other.

Establishing the Date for Easter

The timing of Easter does, in fact, vary from year to year on the calendar. This holiday is not mentioned in the Bible. (Acts 12:4 in the King James Version is a known mistranslation, correctly rendered as Passover in nearly all other translations.) Easter was instituted by the early church fathers. Also in the fourth century CE, the Council of Nicaea set the date for Easter as the Sunday following the full moon following the Spring equinox.

Yet even that is not without controversy. The equinox and full moon used in this method are not astronomical observances. The equinox was determined to always be March 21 and the full moon was determined to be 14 days after the start of the “ecclesiastical” new moon. And while I cannot fully explain exactly what that “ecclesiastical” moon is, a disagreement between the Roman church and the Eastern church on these issues has led to them observing different dates for Easter Sunday almost 75% of the time.

There have been some who have suggested that the date for Easter is taken from a pagan celebration. It is true that “Ostara,” one of the eight annual pagan holidays, occurs at the vernal (spring) equinox, and that this is associated with fertility, the practice of coloring eggs, and a tale of egg-laying rabbits. However, I have not been able to find credible evidence that the date selected to celebrate the resurrection of Jesus by the Nicaean Council – the first Sunday after the full moon after the equinox – has any pagan history. Certainly no Christian who gathers for a sunrise service on Easter is either knowingly or unknowingly paying homage to the invincible sun god or the goddess of fertility. It is a sincere celebration to honor the risen Savior.

The reason behind the Council of Nicaea deciding on the date for celebrating the resurrection runs far deeper than simply adapting a Christian meaning to an already existing pagan festival – the explanation commonly given by many in the Messianic movement, which is probably not factual. The timing was already clear in the Gospel accounts: It was the first day of the week following Passover. But in the fourth century the church made a conscious decision to divorce itself from anything Jewish. This Council set a new foundational date for Easter, out of which would eventually come a liturgical calendar including Good Friday, Maundy Thursday, and a full Passion Week beginning with Palm Sunday. Yahweh’s appointed times of Passover and the Feast of Unleavened Bread were no longer necessary.

The actions of the Council of Nicaea are a continuation of the division of Israel following the idolatry of King Solomon. If you are not familiar with the separation of the two houses of Israel, you can read my series of articles here: Part 1, Part 2 and Part 3. In the previous paragraph, I intentionally used the phrase “divorced itself from anything Jewish.” Those of us growing up in the Christian church have suffered the effects of that divorce for more than 1600 years – longer than the time between the exodus from Egypt and the first advent of the Messiah. Recently I came across the following paragraph in the book The Bridge: Crossing Over Into the Fullness of Covenant Life

by Tyler Dawn Rosenquist, describing what has happened in a way I had not previously considered.

To me, knowing the history of the fourth century CE – that Rome forcibly legislated the removal of Christians out of the synagogues and Torah keepers out of the assemblies of Messiah – Christians celebrating Christmas and Easter seem very much like children celebrating the consequences of having a broken home. Without the Christians, the Jews lost their Messiah and without the Jews, the Christians lost their inheritance. It’s like a child celebrating the absence of a parent who wasn’t even a bad parent. Christmas and Easter happened because of a broken home, and that grieves me – it doesn’t make me want to celebrate. At one point all believers in Yeshua were called Nazarene Jews, for hundreds of years – Rome robbed us of a stable home life.

As the “restoration of all things” (Acts 3:21) is taking place, followers of Yeshua (Jesus) are returning to “the faith which was once for all handed down to the saints” (Jude 3). There was no Easter when those words were penned. The disciples observed the appointed times of God, established in His Torah, that you can read in Leviticus chapter 23. As we go back to doing this today, the man-made/church-made holidays that replaced them become less and less significant, sometimes even repulsive. For some, the transition is quick and easy. For others, it may be more difficult and take a little longer. The Holy Spirit will deal with those who are seeking truth, and it is not necessary for us to “help” in ways that too often come across as harsh or condemning.

This year, 2016, Passover on the Jewish calendar happens after the Christian Easter. Why? Because historically the Christian church has rejected the Hebraic roots of the faith. I am not advocating for the correctness of either date; I am only pointing out that this year the Gospel story reflected in these celebrations is out of order. That won’t happen again until the year 2024. This year, questions will be raised and we need to have answers – answers that draw us and those we talk with into a deeper walk, a deeper obedience, and a deeper relationship with the Messiah. It is time to end the division and seek restoration.

1 thought on “Why Is Easter Before Passover?”