↓
Home→Feasts→Shavuot – Pentecost, the Feast of Weeks 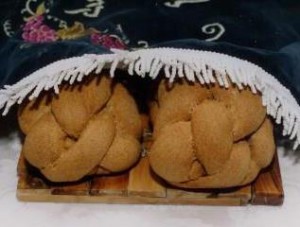 This Sunday, June 12, 2016, is Pentecost. Yeah, a lot of people thought it was last month. That misconception happened because, as I pointed out earlier, this year most Christians commemorated the resurrection of Yeshua (Jesus) a month before the Passover! But counting 50 days (inclusive) from the day after the Sabbath following Passover, seven complete Sabbaths and one day, brings us to this coming Sunday, June 12, for the Feasts of Weeks – Shavuot in Hebrew, Pentecost in Greek and Latin.

On this day, in the year that Yeshua was resurrected, “there were dwelling in Jerusalem Jews, devout men from every nation under heaven” (Acts 2:5). They were assembled in Jerusalem for the Feast of Weeks, one of the three commanded pilgrimage festivals. “Three times a year all your males shall appear before the LORD your God at the place that he will choose: at the Feast of Unleavened Bread, at the Feast of Weeks, and at the Feast of Booths” (Deuteronomy 16:16). This was not the first Pentecost; it had been celebrated for 1500 years, since the time the Israelites came out of Egyptian bondage.

But wait, were they “Jews” or were they “men from every nation under heaven?” The answer is, Yes! They were Jews (Strong’s Greek word #2453), yet Acts 2:8-11 reveals that they were both ethnic Jews and Jewish converts, born in many different nations and speaking many different languages. The prophets had long foretold that God would scatter the people of Israel to the nations and then regather them in the land of Israel. Here, in Jerusalem at the beginning of the “last days” (Acts 2:17, quoting from Joel 2:28), was just a small glimpse into a spectacular future event at the end of the age.

The Heritage of Jerusalem

God loves Jerusalem, the City of Truth on the Holy Mountain (Zechariah 8:3). His desire is to make “Jerusalem a praise in the earth” (Isaiah 62:7). Her future is a re-gathering place for all those of the nations who worship Him (Isaiah 2:2,3). The Sons of Korah, musicians in the Temple, sang about Jerusalem and the heritage of her people as recorded in Psalm 87.

His foundation is in the holy mountains.
The LORD loves the gates of Zion
More than all the other dwelling places of Jacob.
Glorious things are spoken of you,
O city of God.
(Psalm 87:1-3)

Jacob, when blessing the sons of Joseph, prophesied that Ephraim would become a “multitude of nations” (Genesis 48:19). The Hebrew word translated “multitude” (Strong’s #H4393 melo’) literally means “fullness.” By the time this Psalm was written, during the divided kingdom, fulfillment was already taking place – even prior to the fall of the Northern kingdom to Assyria. The Father, the sovereign Ruler of the Universe, looked across time and set the stage for the “fullness of the gentiles (nations)” to come back into the Commonwealth of Israel (Romans 11:25, Ephesians 2:11-13).

This week Torah portion Bamidbar brings us to the first chapters of the book of Numbers.

Then the LORD spoke to Moses in the wilderness of Sinai, in the tent of meeting, on the first of the second month, in the second year after they had come out of the land of Egypt, saying, “Take a census of all the congregation of the sons of Israel, by their families, by their fathers’ households, according to the number of names, every male, head by head… (Numbers 1:1,2)

The entire camp was together as one people, and Scripture records that Moses and Aaron registered the people “just as the LORD had commanded Moses. So he numbered them in the wilderness of Sinai” (Numbers 1:19). We can envision how this was possible, even though it was a colossal task. Then the seed of Abraham was scattered to every nation, as the stars of the heavens and the sands of the sea (Genesis 22:17). But this Psalm tells us that God knows and has recorded all of His scattered children. His Israel, both Jew and non-Jew – Judah and Ephraim – are written individually in the register of the Book of Life.

Yahweh Himself will write in the register. “Rejoice that your names are recorded in heaven” (Luke 10:20). Here expressed so long ago in this Psalm is the glory of our Father as He gathers and prepares the bride, the New Jerusalem (Revelation 21:2), those from every nation that He has called citizens of His holy city.

Standing before the throne of God and before the Lamb is a multitude “no one could count, from every nation, tribe, people and language” (Revelation 7:9). But the Father knows each one individually, and the 87th Psalm assures us we are counted, registered, and called citizens of Zion. Keep this picture in your mind as you celebrate the Feast of Weeks, Shavuot or Pentecost, this weekend.

At all the festivals, the people will sing,
“The source of my life is in Jerusalem!”
(Psalm 87:7 NLT)