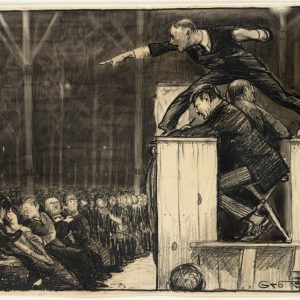 After his infamous showdown with the prophets of Baal on Mount Carmel, Elijah ran and hid in a cave. It was there, while he was sulking and feeling sorry for himself, that he encountered the “still, small voice” of the Spirit of God. He received three instructions: 1) anoint Hazael as king over Aram, 2) anoint Jehu as king over Israel, and 3) anoint Elisha as prophet in his place.

Jehu became the tenth king of the northern ten tribes of the divided kingdom of Israel. He took over the throne by assassinating King Jehoram, son of King Ahab and Queen Jezebel. Jehu claimed to have had a “zeal for the LORD” (2 Kings 10:16), and his actions after making that statement would seem to confirm it. Through a well-planned conspiracy, he brought all the worshippers of Baal together, being careful that none of the followers of Yahweh were among them. Jehu then had all of them killed, destroyed their idol pillars, “broke down the house of Baal, and made it a latrine” (2 Kings 10:27). According to the Biblical record, “Jehu eradicated Baal out of Israel” (2 Kings 10:28).

That is a good thing, right? King Jehu removed all traces of Baal, the Canaanite god, from the land so that the people would worship only Yahweh. In fact, the LORD commended Jehu for his actions, saying he had done well and would be rewarded by his sons reigning over Israel through the next four generations. But although Jehu had done well in removing Baal, Scripture also says that “he did not depart from the sins of Jeroboam [the first king of Israel]” (2 Kings 10:31).

The Sins of Jeroboam

The account of King Jeroboam and the succession of the northern tribes of Israel is found in the Bible in 1 Kings 12. Fearing that the people would go to Jerusalem to worship as the LORD commanded, and thus return to the house of King David, Jeroboam devised his own new ways to worship. He set up images in his own towns to represent the God of Israel and established new sacred holidays to replace the festivals established by God. Basically, Jeroboam discarded all the old religious ways and modernized them, making them more suitable to the contemporary situation of his people. And of course he was still doing his best to worship the one true God.

The southern kingdom of Judah had also strayed from true worship. In fact, it was the idolatry of King Solomon that led to God dividing the kingdom in the first place, and his son Rehoboam followed the same path. There were times of revival in Judah’s history, such as under King Hezekiah who “did right in the sight of the LORD, according to all that his father David had done” (2 Kings 18:3). But those days did not last, and Hezekiah’s son Manasseh brought Judah down to a new low in wickedness and idolatry. Eventually both houses of Israel went into separate captivities as the result of their idolatry.

What happened in ancient Israel has also happened in Christianity. In the centuries following the time of Yeshua (Jesus) as the Gospel went out to the nations, the Biblical ways of worship were abandoned, including God’s commanded celebrations of Sabbath, Passover and Sukkot (the Feast of Tabernacles). They were replaced with Sunday worship and new holidays like Easter and Christmas – things never mentioned in the Bible.

These become the norm; they become the baseline for what we think is good and acceptable worship. Christians had separated themselves from their Hebrew Roots, just like Jeroboam of old.  They decided to worship God in their own way, believing that to be acceptable to Him.

The Image of Jehu’s Revival

At various points in history, the Church has experienced revival; times like Jonathan Edwards and the Great Awakening, the Second Great Awakening at Cane Ridge, and great moves of God under the ministries of Wesley, Calvin, Wycliffe and Finney. More recently were the revivals in Wales and on Azusa Street in the early twentieth century, the crusades of Billy Sunday and Billy Graham, revival at Asbury College, the Jesus People and the Charismatic movement. At the beginning of each of these revivals was the call to repentance, seeking the face of God and turning back to Him.

But all that really happened was a return back to that baseline of what we have decided is good and acceptable worship. Like Israel under King Jehu, we turn from the modern day Baal – the sin and idolatry that has invaded our lives. But in the “revival,” we only just go back to where we were with the Church-devised worship methods and Church-created sacred celebrations and observances. And yes, God is pleased when we turn from sinful ways.  But in the same way Jehu was zealous for the LORD and yet remained in the sins of Jeroboam, Christians are zealous for the Gospel of Yeshua yet remain oblivious to God’s commandments and the way He desires to be worshipped.

“For My people have forgotten Me, they burn incense to worthless gods and they have stumbled from their ways, from the ancient paths” (Jeremiah 18:15).

“Thus says the LORD, ‘Stand by the ways and see and ask for the ancient paths, where the good way is, and walk in it’” (Jeremiah 6:16).

During the reign of King Hezekiah in Judah, some from the northern kingdom of Israel did return to Jerusalem to keep the Passover.

“All the assembly of Judah rejoiced, with the priests and the Levites and all the assembly that came from Israel, both the sojourners who came from the land of Israel [the northern kingdom] and those living in Judah [the southern kingdom]. So there was great joy in Jerusalem, because there was nothing like this in Jerusalem since the days of Solomon the son of David, king of Israel. Then the Levitical priests arose and blessed the people; and their voice was heard and their prayer came to His holy dwelling place, to heaven” (2 Chronicles 30:25-27).

They had returned to their roots, to the original faith of the God of Israel. May we do likewise in our day.

For more about the restoration of the Two Houses of Israel, click here: Part 1, Part2, Part 3.  For additional information on the Hebrew Roots Movement, click here.