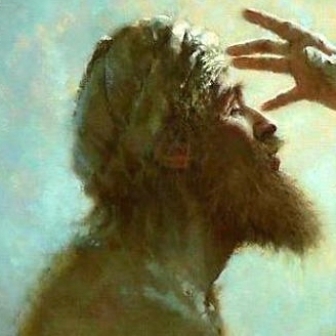 The story of the healing of blind Bartimaeus is recorded in all three of the Synoptic Gospels – Matthew, Mark, and Luke. In these accounts we can see an important illustration of the reuniting of the two houses of Israel. I am not saying that this miracle is about the two houses of Israel, but I am suggesting that it presents a picture with some important insights from which we can learn.

Restoration of the Two Houses of Israel

Following the reign of King David and King Solomon, the nation of Israel was divided into two kingdoms – Judah to the south, and Israel or Ephraim to the north. The northern kingdom fell to the Assyrians in about 722 BCE. The southern kingdom went into Babylonian captivity in about 586 BCE. A remnant of the southern kingdom of Judah returned to the land of Judea after 70 years. Some of the faithful from the scattered northern tribes also made their way to Judea.

Messiah Yeshua hails from the tribe of Judah and the line of King David. In 70 CE, 40 years after Yeshua’s death and resurrection, Jerusalem fell to the Romans. Less than a hundred years later the Jewish nation was no more. The remnant that was still in Judea was now scattered to the nations, just like the bulk of the northern and southern kingdoms centuries before.

There are many prophecies concerning the future restoration of Israel. A very specific one, yet unfulfilled, is found in Ezekiel chapter 37.

Thus says the Lord GOD, “Behold, I will take the stick of Joseph, which is in the hand of Ephraim, and the tribes of Israel, his companions; and I will put them with it, with the stick of Judah, and make them one stick, and they will be one in My hand. …I will take the sons of Israel from among the nations where they have gone, and I will gather them from every side and bring them into their own land; and I will make them one nation in the land, on the mountains of Israel; and one king will be king for all of them; and they will no longer be two nations and no longer be divided into two kingdoms. They will no longer defile themselves with their idols, or with their detestable things, or with any of their transgressions; but I will deliver them from all their dwelling places in which they have sinned, and will cleanse them. And they will be My people, and I will be their God.”
(Ezekiel 37:19-23)

It is important to note that from the beginning, Israel was made up of more than just the physical descendants of Jacob. The nation that left Egypt was a “mixed multitude” (Exodus 12:38). Foreigners have always been invited to participate in the covenant (Isaiah 56:3-8). The restored kingdom, when the two sticks are joined together into one, is made up of Judah and his companions and Joseph/Ephraim and his companions (Ezekiel 37:15-20).

Yeshua quoted the prophet Isaiah when he said, “My house shall be called a house of prayer for all the nations” (Mark 11:17, Isaiah 56:7). The prophecy he quoted describes foreigners from many nations joining themselves to the God of Israel. The restoration of the two houses of Israel is about covenant, not about bloodline.

The Story of Blind Bartimaeus

A blind man sitting by the road heard a crowd approaching. Yeshua was in the crowd, and evidently this blind man had heard something about him. He loudly called out a very specific request addressed to a very specific person: “Son of David, have mercy on me!” Yeshua stopped, called for the man, and asked what he (the man) wanted him (Yeshua) to do for him. Without hesitation, the blind man told Yeshua he wanted to see. Yeshua healed him.

Each author of the individual gospel accounts tells a similar story with much the same language, however there are subtle differences. Those are important.

In the Gospel of Mark

Mark was probably a Jewish man, identified later in the book of Acts as John Mark (Acts 15:37). And though he is known to have traveled with Paul and Barnabas on their first journey, tradition tells us he was a companion and disciple of Peter. He may have observed some of the things Yeshua did first hand, and would have gained much insight and many more details from Peter.

Mark identifies the blind man by his family name – Bartimaeus, the son of Timaeus (which is actually what his name means). Family heritage was important to the Jews of that time, as it is today. They knew that the promised Messiah would be from the family line of King David, and Bartimaeus called Yeshua by a very messianic name – “the Son of David.” It was unmistakable that he was making this reference to Yeshua as the Messiah.

The Jewish people, known as the House of Judah (regardless of tribal heritage), have maintained a sense of ethnic identity and religious practice throughout their existence – a “name” if you will. Though many have been blinded to Yeshua as the Messiah, they know their expected Messiah is the Son of David. When they acknowledge him and call out to him, their eyes are opened.

In the Gospel of Luke

Luke was probably not a Jewish man. The author of both the Gospel of Luke and the Acts of the Apostles, he is known from his travels with Paul. He claims to have done extensive research into the events surrounding Yeshua (Luke 1:1-4) though his sources are not identified.

Luke writes about a blind man, but never identifies him by name. Luke is the only writer who states that the blind man, hearing the crowd, asked who it was. It was only after being told that it was Yeshua that he cried out, “Son of David, have mercy on me!”

The northern kingdom, the House of Israel, was removed from the land by the Assyrians. Over the years a few made their way back to Judea; most did not. They were assimilated into other nations, other cultures, and other religious practices. We often call them the “lost tribes” – unknown and unnamed. They and those where they have been assimilated don’t really recognize or comprehend the Jewish Yeshua until they are told about him, call out for mercy, and have their eyes opened.

Was this unnamed blind man in Luke’s account Bartimaeus? Maybe not… read on and see why.

In the Gospel of Matthew

Matthew – or Levi – was a tax collector, most likely a Galilean man in league with the Roman government. After becoming a disciple of Yeshua, he wrote with a strong emphasis on the Messianic prophecies. Perhaps in the compromised loyalty from his former life prior to Yeshua he would have learned to see two perspectives of a situation – Jewish and Greco-Roman.

Matthews’s account is unique in one very important point. Matthew clearly says there were two men, and he continued telling his story using plural pronouns – they, them, us, and their. One of the men, evidently, was Bartimaeus. The other blind man, equally important to the story, is unknown and unnamed.

Both of these  men, the known and the unknown, the named and the unnamed, were sitting by the road. Neither of them could see. They both called out to the Son of David, the Messiah, for mercy. And both of them received a touch from Yeshua. Their eyes were opened, and for each of them their faith – their belief that Yeshua would cure their blindness, open their eyes, and allow them to regain their sight – is what made them well. The Greek root word translated “well” is sozo (G4982), often translated “saved.”

It’s a True Story, Not a Parable

Is this true story of the healing of blind Bartimaeus and his companion really all about the Two Houses of Israel and the Restoration of all Israel? No, it is not. It is a factual, historical event, a real healing of two blind men who cried out to Yeshua, the Son of David, the Messiah, for mercy. The focus is on these two blind men calling to Yeshua in faith, believing he could heal them, and Yeshua opening their eyes. And in the end, when they had regained their sight, they followed him.

There is no reason at all to think that Matthew, Mark, or Luke would have even thought about the divided kingdom, the scattered tribes, or the Ezekiel prophecy about two sticks as they reported this event. This wasn’t about the future. This was about a real-time, current wholeness brought about by faith in Yeshua. Two blind men had a life-changing experience when they encountered the Son of God. That is what this is about.

And yet, the story of restoration is a thread that runs all the way through the Bible. This story, and the three slightly different accounts told by three different authors, serves as an illustration of a coming time when, through Messiah Yeshua, the blindness will be removed from both houses of Israel.

Amazing grace, how sweet the sound
That saved a wretch like me
I once was lost, but now I’m found
Was blind, but now I see

Here is a parallel reading of the three Gospel accounts. Matthew is shown in blue, Mark is shown in red, and Luke is shown in green.

Then they came to Jericho.

— — —
So they called the blind man, saying to him, “Take courage, stand up! He is calling for you.” Throwing aside his cloak, he jumped up and came to Jesus.
and when he came near,