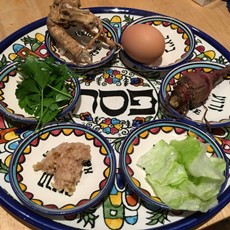 Given the current situation with COVID-19, social distancing rules and stay-at-home orders, some have suggested that the Passover should be postponed. According to the Jerusalem Post, Israel’s Supreme Court denied a request by some to declare a “leap year,” which would have delayed Passover (and everything else) by one month for the everyone.

There is a provision in Torah where, under certain circumstances, Passover can be celebrated one month later than normal.

“Speak to the sons of Israel, saying, ‘If any one of you or of your generations becomes unclean because of a dead person, or is on a distant journey, he may, however, observe the Passover to the LORD. ‘In the second month on the fourteenth day at twilight, they shall observe it; they shall eat it with unleavened bread and bitter herbs. ‘They shall leave none of it until morning, nor break a bone of it; according to all the statute of the Passover they shall observe it. ‘But the man who is clean and is not on a journey, and yet neglects to observe the Passover, that person shall then be cut off from his people, for he did not present the offering of the LORD at its appointed time. That man will bear his sin.
(Numbers 9:10-13)

This instruction from Yahweh came because a group of men came to Moses after becoming unclean because of a corpse. One tradition says these were the men who were carrying the bones of Joseph, and another tradition says they came upon an unidentified corpse and buried it according to the Torah commandment. It is interesting that there is nothing in Torah specifically forbidding someone from observing Passover for this reason, yet from God’s response it appears their concern was legitimate. This is another indication that Scripture does not tell us every detail of everything.

God granted a one-month delay for certain individuals unable to keep the Passover for two reasons: defilement because of a dead body or traveling a long distance. The rest of Israel kept Passover at the regular time. In fact, to not do so meant that someone would be “cut off” from the community.

Although Passover could be postponed for these reasons, there is no instruction to delay the Festival of Matzot/Unleavened Bread. The second month Passover observance is a meal that stands by itself. Here are the notes for this passage from The Stone Edition – The Chumash:

The second Pesach differs from the first in that there is no festival associated with it, even for those bringing the offering. Furthermore, although they may not eat leavened food (chametz) with the offering (V.11), they may possess and eat chametz on the day they bring it.

Passover is not a memorial for large groups – it is not a “convocation.” The Hebrew word to describe these convocations is מקרא miqra (Strong’s Hebrew word #H4744). It is used to describe the weekly Sabbath as well as all seven of the annual Sabbath observances in Leviticus 23: the first and last day of Matzot (Unleavened Bread), Shavuot, Yom Teruah, Yom Kippur, the first day of Sukkot, and Shemini Atzeret, the Eighth Day Assembly. Passover is not a miqra (neither is the waving of the first fruits).

The slaughter of the Passover lamb was a public event (Exodus 12:6) but the Passover itself is an observance for individual families.

“Speak to all the congregation of Israel, saying, ‘On the tenth of this month they are each one to take a lamb for themselves, according to their fathers’ households, a lamb for each household. Now if the household is too small for a lamb, then he and his neighbor nearest to his house are to take one according to the number of persons in them; according to what each man should eat, you are to divide the lamb.'”
(Exodus 12:3-4)

The LORD said to Moses and Aaron, “This is the ordinance of the Passover … It is to be eaten in a single house; you are not to bring forth any of the flesh outside of the house… “
(from Exodus 12:43-47)

Unless your family is disqualified by contact with a corpse or is away on a distant journey, Passover is to be kept at the appointed time. Being unable to meet with friends for a mass gathering because of social distancing rules is not a Scriptural reason to delay Passover.

Aside from the initial incident in Numbers 9, there is only one instance of delaying Passover detailed in Scripture. 2 Chronicles 29 describes the beginning of King Hezekiah’s reign. The first thing he did was to repair the Temple. The Bible records that he began on the first day of the first month. However, he wasn’t able to finish until the sixteenth day – past the time of Passover.

Now Hezekiah sent to all Israel and Judah and wrote letters also to Ephraim and Manasseh, that they should come to the house of the LORD at Jerusalem to celebrate the Passover to the LORD God of Israel. For the king and his princes and all the assembly in Jerusalem had decided to celebrate the Passover in the second month, since they could not celebrate it at that time, because the priests had not consecrated themselves in sufficient numbers, nor had the people been gathered to Jerusalem. Thus the thing was right in the sight of the king and all the assembly.
(2 Chronicles 30:1-4)

Then they slaughtered the Passover lambs on the fourteenth of the second month… The sons of Israel present in Jerusalem celebrated the Feast of Unleavened Bread for seven days with great joy, and the Levites and the priests praised the LORD day after day with loud instruments to the LORD. Then Hezekiah spoke encouragingly to all the Levites who showed good insight in the things of the LORD. So they ate for the appointed seven days, sacrificing peace offerings and giving thanks to the LORD God of their fathers. Then the whole assembly decided to celebrate the feast another seven days, so they celebrated the seven days with joy.
(2 Chronicles 30:15,21-23)

Hezekiah led Judah and Israel in a celebration of Passover and Unleavened Bread in the second month, including an extra seven days. Was that OK? Well, it happened. Somewhere along the line there was something that was displeasing to God, and he sent a plague or something that required healing (2 Chronicles 30:20). Hezekiah prayed, asking pardon for what they were doing wrong, and God healed them.

None of us are able to do everything in the Passover observance exactly right. We do the best we can, seeking like those under Hezekiah to learn what pleases our Father and asking for his mercy when we fall short. So how should we approach this Passover?

First, we should keep Passover at the time God designated. For most of us, the COVID-19 pandemic isn’t one of the Scriptural reasons to delay. If you aren’t sure when Passover is (not to get into any controversial calendar issues – this is from the Hillel Jewish calendar), do it on the evening of Wednesday, April 8. Follow that as you normally would with the seven days of Unleavened Bread. Even though we cannot hold a miqra qodesh (a holy convocation), the first and last days (Thursday, April 9 and Wednesday, April 15) should be observed as Sabbaths (Torah does not actually use that term for these days).

When you observe the Passover, you can do most or all of the things you might have done had you gone to someone else’s home or to a large gathering. It will require a little preparation. I have created a step-by-step booklet called a haggadah that I normally use for Passover with incarcerated men. You can read about it and download a copy for yourself here if you want.

Much of the Passover Seder, the formal ceremony and meal, is based on tradition. If you are uncomfortable keeping all of those traditions, there are really only a few things that Scripture instructs us to do for Passover, and they are pretty easy. You will find these listed in Exodus 12:8.

We are told in Exodus 12:26-27 that we are to recount the Biblical story. As followers of Yeshua, we are also told to remember his death at this time. He used the matzah to represent his body and a cup of wine to represent his blood. Since it is not possible now to properly sacrifice a Passover lamb, many Messianic believers use the matzah, representing the Lamb of God, in place of eating lamb. Beyond these things, nothing more is required. The rest is tradition.

Can we have a Passover Seder after the stay-at-home order has lifted? Certainly, and that is something we might look forward to doing. But it isn’t a substitute for keeping Passover at the time Yahweh designated.

You are reading my opinion and understanding, and how my family will handle this tough situation. Seek the Father’s will, and be blessed in what you do.

2 thoughts on “Should We Postpone Passover?”