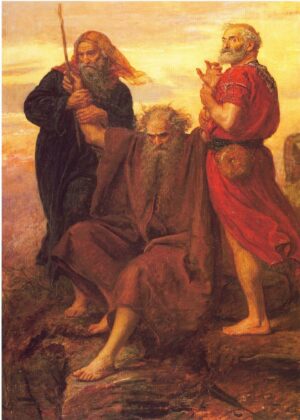 Have you ever felt as if you didn’t quite have enough faith? Yeshua’s (Jesus’) disciples once came to Him with the request, “Increase our faith!” (Luke 17:5). A father with a son in dire need of healing cried out to Yeshua, “Help my unbelief!” (Mark 9:24). Paul instructed Timothy to pursue faith (1 Timothy 6:11) and the writer of Hebrews tells us that it is impossible to please God without faith (Hebrews 11:6). What does it really mean to have faith?

First it is important to establish that, contrary to what some popular teachers have declared on Christian television, faith is not a verb. You can’t “faith” something into happening. Faith is a noun – a thing. Check any dictionary of the English language. Check any dictionary of the Greek and Hebrew words translated in the Bible as “faith.” Faith is a noun.

The Greek root word used in every occurrence of “faith” in the New Testament is pistis, Strong’s number G4102. (Hebrews 10:23 in the KJV has an incorrect translation of a different Greek word that should be “hope,” which you can easily verify.) Thayer’s Greek Lexicon says this noun is a “conviction of the truth of anything; belief.” It may be this Greek definition that seems to give this abstract “faith” its mysterious power that so fascinates people who are looking for something different.

“For I am not ashamed of the gospel, for it is the power of God for salvation to everyone who believes, to the Jew first and also to the Greek. For in it the righteousness of God is revealed from faith to faith; as it is written, ‘But the righteous man shall live by faith’” (Romans 1:16-17). The same Greek word pistis (in proper grammatical form) is used three times in this passage. “Revealed from faith to faith” is an intriguing phrase that can really be confusing without a solid understanding of what “faith” means. The last part is a quote from the Tanakh (Hebrew Bible, the Old Testament) in Habakkuk 2:4, “But the righteous will live by his faith.” Perhaps since this gospel is “to the Jew first” and then the Greek, we might want to consider the Hebrew Scriptures first to get a grasp of this concept.

Faith in the Tanakh

The Hebrew word used in Habakkuk 2:4 and translated as “his faith” is the masculine possessive form of emunah, Strong’s number H530. Emunah is one of the more popular Hebrew words talked about in Messianic and Hebrew Roots circles. It may surprise you to learn that the only time it is translated as “faith,” at least in the most widely used Bible versions, is in this one place in Habakkuk. Most frequently it is translated as “faithfulness,” and in fact many Bible footnotes ascribe the meaning “faithfulness” in Habakkuk 2:4. Emunah, a feminine noun, and the masculine noun emun are both derived from the Hebrew verb aman, Strong’s number 539, which Brown-Driver-Briggs defines as “to support, confirm, be faithful.” The righteous man lives by his faithfulness.

The first Biblical occurrence of the Hebrew word emunah is found in the Torah portion b’shallach. The story finds the Israelite army, led by Joshua, fighting the Amalekite army. A strange phenomenon was observed. Moses, standing on the top of a hill watching the battle, had “the staff of God” in his hand (Exodus 17:9). As long as Moses’ hands were extended into the air holding the staff, the army of Israel prevailed. If he lowered his hands, the army of Amalek prevailed. Then we read this:

“But Moses’ hands were heavy. Then they took a stone and put it under him, and he sat on it; and Aaron and Hur supported his hands, one on one side and one on the other. Thus his hands were steady until the sun set” (Exodus 17:12).

Can you find the word emunah in that verse? The sentence structure is a little different in the English rendition, but this last sentence says, “it was his hand of emunah (faithfulness, steadiness) until the going down of the sun.” It wasn’t just belief or a conviction of the truth (remember Thayer’s definition) that won the battle. It was the faithfulness of Moses’ actions.

It is important to note that the faith, or faithfulness, of Moses increased to the point that it got Israel through this battle only by the support of those who were around him. We need each other, as Proverbs 27:17 says, “Iron sharpens iron, so one man sharpens another.” In this story are four named players: Aaron, Hur, Joshua and Moses. Their names in Hebrew (remember, read right to left) are spelledאַהֲרֹן חור יְהוֹשֻׁעַ מֹשֶׁה . An acronym of the first letter of each name gives the Hebrew word אָחִים achiym, meaning “brothers” or “brethren.” These brethren working in unity accomplished the task at hand. They were in this fight together.

Faith in the New Testament

Yeshua asked the question, “When the Son of Man comes, will He find faith on the earth?” (Luke 18:8). This appears to be shortly after the disciples asked Him to “increase our faith.” He probably did not ask the question in Greek using the word pistis. Yeshua asked His followers if He would find emunah, “faithfulness,” when He returned. What does it take for us to answer that question in the affirmative?

In the New Testament book of Hebrews we find what is often called the “Faith Hall of Fame.” Hebrews chapter 11 lists over and over again those who did something “by faith.” Try reading the chapter using the words “by his (her, their) faithfulness” and see how it opens up the depths to which each of these historical figures was committed to their faith and lived it out.

Just before announcing this Hall of Fame, the writer of Hebrews shows how we can obtain the same status. “Let us hold fast the confession of our hope without wavering, for He who promised is faithful; and let us consider how to stimulate one another to love and good deeds, not forsaking our own assembling together, as is the habit of some, but encouraging one another; and all the more as you see the day drawing near” (Hebrews 10:23-25). Do you want to see your faith increased? Surround yourself, like Moses did, with those who will hold you up when your faith is tired. Do you see someone else struggling in their faith? Take hold of their hands and lift them up.

And don’t forget what the writer of Hebrews said right after presenting the Hall of Faith: “Let us run with endurance the race that is set before us, fixing our eyes on Jesus, the author and perfecter of faith(fulness)” (Hebrews 12:1-2).

5 thoughts on “How To Increase Your Faith”